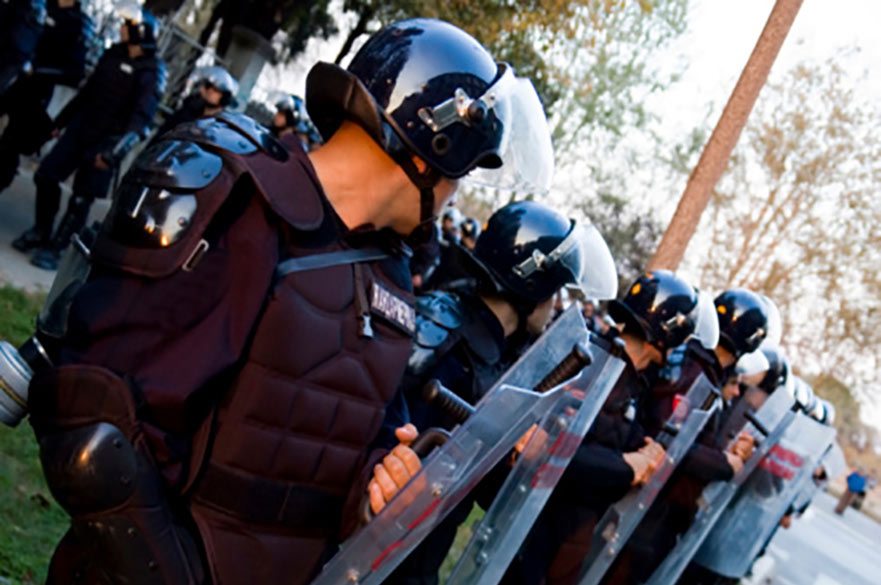 The design – by Nottingham Trent University undergraduate Ben Palmer - may help diffuse or prevent disorders, as protestors would have little or no knowledge of who they face.

The 21-year-old – who's studying BA Product Design - interviewed rioters and police to help shape his product.

"Riot police have a difficult job to do, and can regularly face very intense situations", said Ben, who's studying at the School of Architecture, Design and the Built Environment.

"So I wanted to use my degree to explore how smart technology could be used to enhance the tools they have at their disposal.

"By interviewing rioters, it became very clear that police could gain a psychological advantage if their shields incorporated one-way privacy.

"Not only would it allow police to mask their numbers, but rioters wouldn't know who or what they were facing."

Ben's designs recently went on show for Nottingham Trent University's 2016 Art & Design Degree Show. The show was one of the largest collections of graduating art and design talent in the UK, with more than 1,300 works on public display.

Made from polycarbonate - a light but strong, heat resistant plastic – the long shields are covered in a film of perforated vinyl which prevents protestors from looking in, but allows officers to look out.

Perforated vinyl works by way of an optical illusion by featuring a pattern of tiny holes.

The outside of the vinyl is light-coloured and appears opaque as a person's eyes naturally focus on the bright surface, rather than on the holes and the darker shade images behind.

By contrast the inside of the vinyl is dark which leads the eye to focus on the light and motion on the other side of the shield.
Ben, who is from Wymondham in Norfolk, who has ambitions to be a police officer, watched riot police training sessions to understand how the shields were used and interviewed officers.

His long shields can lock together to create an impermeable wall. Missiles thrown over the top can be deflected when other long shields are locked into place overhead.

Ben also designed a shield for animal control, a round shield and an intermediate length shield.

"It's a great example of how modern design can used to help support those on the frontline in face of potentially difficult situations."

PC Simon Clarke, of the Public Order and Officer Safety Training department at Nottinghamshire Police, said: "We're always keen to welcome new and innovative thinking in the fight against crime. It was great for our officers to work with Ben and provide him with feedback on his design."