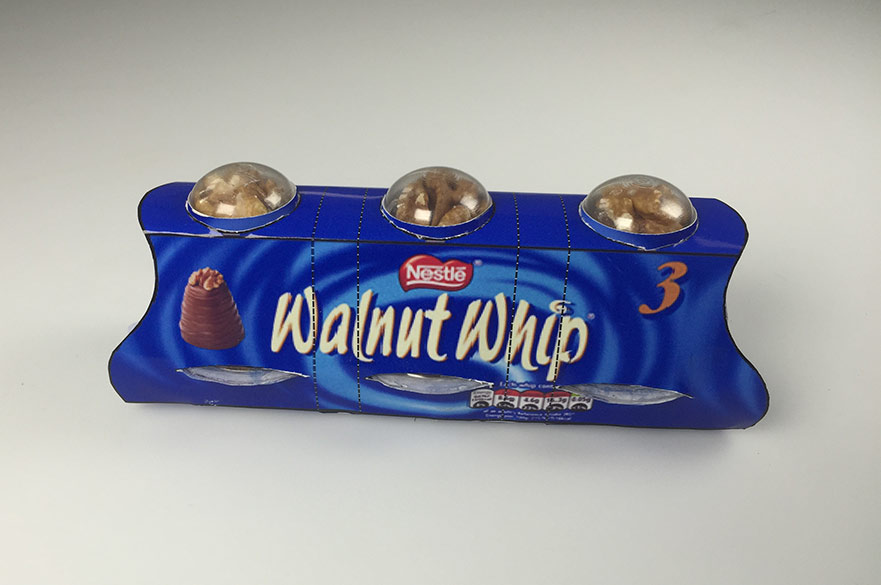 Organised by IOM Communications Ltd and endorsed by The Packaging Society, the awards encourage design students to consider packaging design as a career path. Entries were expected to "challenge conventional thinking and break the rules with off-the-wall creativity".

Tom chose the brief 'Impactful Packaging', which was to create a standout on-shelf design for any Nestlé confectionery brand. Tom's design involved a new proposal for Walnut Whip packaging. The judges commented on his design, saying he had "great thought regarding integration of primary and secondary packs" alongside "a clear and relevant development process and a quality mock-up".

After receiving the award, Tom said: "I wanted to make something that was visible, so using clear plastics helped you actually see the design, rather than just using cardboard, which restricts the view of the product. I felt that redesigning the current packaging rather than rebranding it was the best approach as it allowed me to give a new approach.

It was a great feeling to see that my work had been recognised and that all the hard work had paid off.

"I felt really good about winning the prize as it is a great achievement to put on my CV. The aspect I enjoyed the most was actually physically making the product, and seeing which tools you can use to create the design. I feel I have learnt the skills of packaging design throughout this process."

BSc (Hons) Product Design student Bethany Wignall won a silver award. The brief Bethany entered was 'Listerine Mouthwash – the next generation', which was to create a distinctive pack, or range of packs, that can be used for a new Listerine mouthwash. The judges said her winning design "would look nice on the shelf, as it appears consumer friendly in terms of the end users' needs, and her choice of material would work industrially."

After receiving the award, Bethany said: "My design is similar to a water bottle and has an auto-dosing system. Users hold the fins at the top of the bottle above and below their lips whilst tilting the bottle so that the mouthwash pours into their mouth. My design allows all members of a family to use the one bottle without the need to wash any part of the bottle, therefore providing a more hygienic solution. Also, the auto-dosing system ensures that users receive the correct dose every time."

"It was a great feeling to see that my work had been recognised and that all the hard work had paid off. I'd spent a lot of time figuring out how the auto dosing system in my bottle would work and I had to think about how I would be able to clearly explain my idea to the judges just through my presentation boards, so I'm glad that my design was appreciated and understood."

Congratulations to all the NTU students who were recognised at the Student Starpack Awards.