BA (Hons) Fashion Design student, Isabelle Pennington-Edmead, had a great start to her first term at the School of Art & Design when she was awarded a three-year scholarship from Sarabande: The Lee Alexander McQueen Foundation 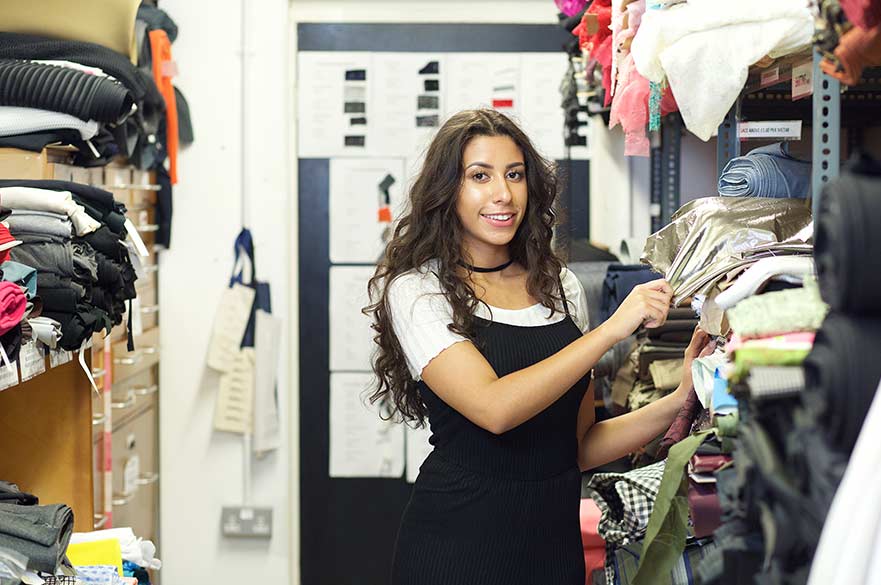 Over 20 years ago the idea for a charitable foundation, Sarabande, was born out of the creativity and experience of inspirational fashion designer Lee Alexander McQueen, to "ensure that the creative talent of gifted students can flourish regardless of financial status."

In the first term of her BA (Hons) Fashion Design degree at NTU, and based on her portfolio of work, Isabelle Pennington-Edmead was selected by tutors as one of five first year fashion students to attend Sarabande's London headquarters in October 2016. The students met a small interview panel headed up by esteemed designer Todd Lynn, presented their portfolios and were asked a number of questions about their inspirations and influences.

Isabelle explained: "I have always been interested in fine art and clothing, so fashion was something that combined my two biggest interests. I think that fashion is an art form different to any others, and it’s the most immediate form of self-expression.

"I often like to put meaning in my work, and put across my opinions and messages about things personal to me that I feel strongly about. I think that, by giving my work meaning, it creates a sense of uniqueness. I am very influenced by the news and current issues – I like looking into politics and people's opinions on current affairs. I am also really inspired by conceptual art and love visiting galleries and exhibitions for inspiration."

On being selected for the process, Isabelle said, "I would describe the news of being put forward to be considered for this award as a great shock! To be approached by the University and told that I was being put forward for the chance to gain a scholarship from a world-renowned fashion house was unbelievable. Before meeting the interviewing panel I was very nervous. However, I soon forgot about this while explaining the ideas, thoughts and inspirations that had gone into the work I had created in my portfolio. The panel were welcoming and very responsive."

As a result of Isabelle's interview, she was awarded a scholarship entirely covering her fees for all three years of undergraduate study, as well as access to experts from creative industries and interaction with Sarabande patrons during her studies. After graduation, scholars are also offered a studio space at Sarabande HQ to continue their practice and to develop their relationship with Sarabande creatives as they start their careers.

An overjoyed Isabelle commented: "Sarabande will help me a lot with funding for my degree, and allow me to explore more freely with different fabrics and processes I may not otherwise have been able to use without their help. I am really looking forward to having professional support from such a prestigious organisation."

The School of Art & Design at NTU is one of only a small handful of UK institutions supported by the foundation.

For more information about Sarabande, the Lee Alexander McQueen Foundation, and their work in support of young creative talent, visit the Sarabande website.