The origins and secrets of the 17th Century ‘Selden Map of China’ – the world’s oldest surviving merchant map – have been revealed by scientists using state-of-the-art imaging techniques. 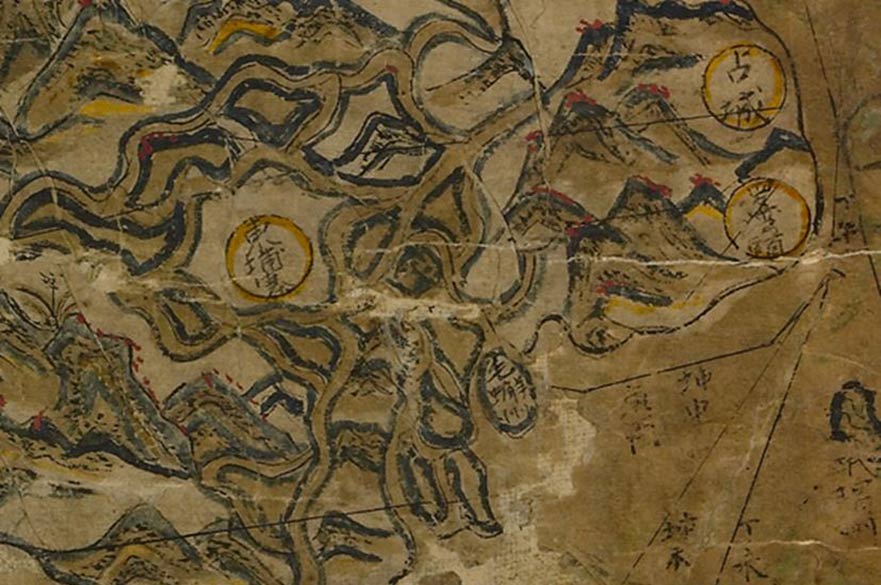 The origins and secrets of the 17th Century ‘Selden Map of China’ – the world’s oldest surviving merchant map – have been revealed by scientists using state-of-the-art imaging techniques.

Research led by Nottingham Trent University, in collaboration with the Science Section of the Victoria and Albert Museum, has for the first time been able to identify everything from the materials and techniques used, to the mistakes and re-drawings made by the cartographer.

The scientists, writing in the journal Heritage Science, even propose a new location for the map’s creation based on their evidence.

The 1.6 x 1m map – which depicts ancient maritime trade routes in Asia – is thought to have been made between 1607-1619 and is painted with watercolours and ink on Chinese paper. It is a unique example of Chinese merchant cartography, showing a network of shipping routes with compass directions starting from the port of Quanzhou, Fujian province, and reaching as far as Japan and India.

Very little is known about the origin of the Chinese-style map, which arrived at the Bodleian Library at the University of Oxford in 1659 – having been donated by prominent London lawyer John Selden – where it remained until its ‘rediscovery’ in 2008. In his will, Selden stated it was ‘a map of China made there fairly’ and that it had been taken by an English commander.

The map was examined in-situ and non-invasively using a remote ‘multispectral’ imaging system developed at Nottingham Trent University. The system enabled the scientists to view areas of the map using different wavelengths of light – revealing the composition and make-up of materials used, as well as hidden details not visible to the naked eye. A range of complementary analytical techniques were used to identify the materials.

The researchers found the binding medium used for the map was gum Arabic, a gum made from the sap of the acacia tree – typically used by European, south and west Asians – and not animal glue, which was almost always used in Chinese paintings at the time.

Examinations of the pigment used found a mixture of indigo with orpiment, a yellow mineral – rather than gamboge, a yellow dye – to make a green colour, which is also very unusual for a painting in China in this period.

And the detection of a basic copper chloride in the green areas suggests an influence from south and west Asia, where it was often used in manuscripts. This green pigment was not typically used in paper-based paintings from China.

The binders and pigments used are more consistent with those found in manuscripts from a Persian or Indo-Persian tradition –and the Islamic world – than the European or Chinese, the researchers state.

Detailed examination even found instances where the cartographer made alterations – some stylistic, others unintentional, and some made as the cartographer’s knowledge of a certain area developed. The scientists were able to identify that the trade routes were laid down before the land was drawn in.

They believe that the cartographer did not plan the full map from the beginning, which was why they had to redraw some of the routes many times – and why they ran out of space at the southern and western points of the map, forcing the trade routes to be off the compass directions. Two trade routes were drawn without their corresponding compass directions, suggesting the map was unfinished.

Based on the evidence, the researchers have proposed an alternative origin for the map: Aceh, at the northwest end of Sumatra where it opens out to the Indian Ocean. It is the most westerly port in south east Asia marked on the map and has the longest history of the presence of Islam in south east Asia, as well as a long history of Chinese contact.

It is also one of only six ports on the map marked with a red circle – possibly indicating the main trading network of the map’s owner – and is the only port marked on the map to have a magnetic declination in the early 17th Century closest to that indicated by the tilt of the map’s compass rose.

Any English ship going back to Europe from south east Asia would also have to pass by Aceh either from the east or west coast of Sumatra, and thus giving them the chance to obtain the map.

“This study illustrates the importance of not judging a book by its cover,” said Professor Haida Liang, Head of the Imaging & Sensing for Archaeology, Art History & Conservation research group at Nottingham Trent University.

She added: “A seemingly Chinese map has turned out to be the material evidence of a fusion of cultures. It is stylistically a Chinese painting that follows some Chinese and non-Chinese cartographic elements, but the painting materials and their usage are more akin to those of Persian or Indo-Persian manuscripts.

“Because of its geographic location, Aceh was frequented by Indian, Arab, Chinese and European traders. We believe the map could have been made there by a Fujianese, possibly a Muslim in close contact with the Islamic world.

“This was globalisation in the early 17th Century. By focusing on the material evidence found using scientific analysis and art history, we have arrived at a new conclusion on where the map was made, following previous studies based on historical research. This work shows the immense importance of interdisciplinary research and the new insights it can bring.”