Nottinghamshire Wildlife Trust share their love for the Peregrine Falcon and explain why these amazing birds are becoming an predominantly urban species. 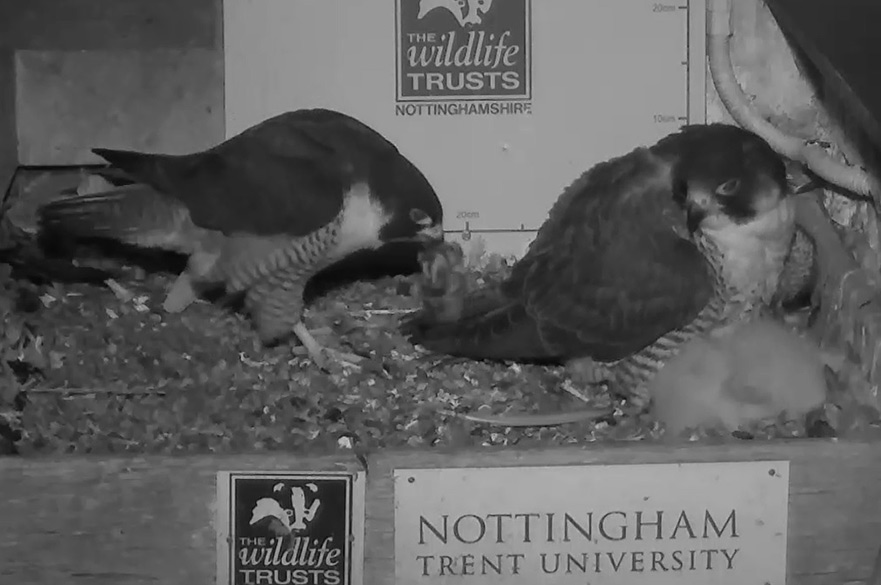 For a number of years the resident pair at Nottingham Trent University's Newton building has laid eggs with amazing regularity. The first egg of this season was laid on 17 March, whilst the first egg of last year and in 2015 was laid on 14 March, and on 16 March in 2014 – a variation of just three days over a four-year cycle.

As well as knowing we'll get to see the eggs in mid-march, peregrine season usually brings with it some unsettled weather to cause worry for those watching the chicks. Within a couple of days of this year's first egg we've already had a few flurries of hail and sleet!

We're all hoping for a successful season, with another three or four chicks being raised, but having reported on the success of this nest for a number of years I thought it was worth reflecting on how the species is fairing across the UK.

From rural life to city dwellers

Traditionally seen as a bird of coastal or mountain top cliffs, the peregrine has transformed into something of a urban specialist. At the turn of the century there were reported to be three pairs in London, whereas today there are thirty. Our new Nottingham male, who arrived on the scene last summer, is a bird from a successful London nest – clearly a bird with a happy concept of city living.

This shift from being a coastal and rural bird to one of city skylines is thought to be as much to do with continued persecution in rural areas as it is the fact that high-rise buildings provide a perfect facsimile of their former cliff top haunts. This shift to urban areas has also coincided with a recovery in numbers – but the fact that the birds are fairing better in urban areas suggests problems in their traditional territories.

Back in 1961 the population was estimated at 385 pairs. By 1991 this had recovered from the lows of the 1950s and 60s to 1,282 pairs and by 2013 this had grown to 1,530 pairs. The low numbers of the 50s and 60s are believed to have been caused by organochlorine pesticides used in farming causing the birds to lay eggs with thin shells leading to reduction in the number of chicks hatching.

Now that these pesticides are no longer in use you might reasonably have expected the birds to simply return to their former nesting sites – after all the cliffs will still be there – but instead we've seen a marked rural to urban shift. This shift is even more marked in Scotland than in England. Whereas the population in England has recovered, there has been an overall population decline in Scotland – this may be because Scotland is a more rural landscape with less suitable man-made structures to replace rural nesting locations.

It is thought that the birds still suffer persecution in some rural areas due to their potential impact on the profitability of commercial grouse shoots. Some are still targeted by rogue falconers and some by people concerned at the death of racing pigeons caused by peregrines.

In England, the safe urban nesting sites have produced good numbers of chicks which then help boost the wider population – with some evidence that birds born in urban area are more likely to favour urban nesting sites when they reach maturity – as illustrated by the new Nottingham male.

Birds in well protected urban nests, especially those with live web cams, are less likely to be targeted and in addition to helping sustain a healthy population across the country, this shift has had the added bonus of providing those of us living in cities with the opportunity to see one of nature's best designed predators at close quarters.