Men's Futsal came out deserved winners after a heroic performance in the Notts Varsity Series. A dramatic game ended 6-5 to the boys in pink! 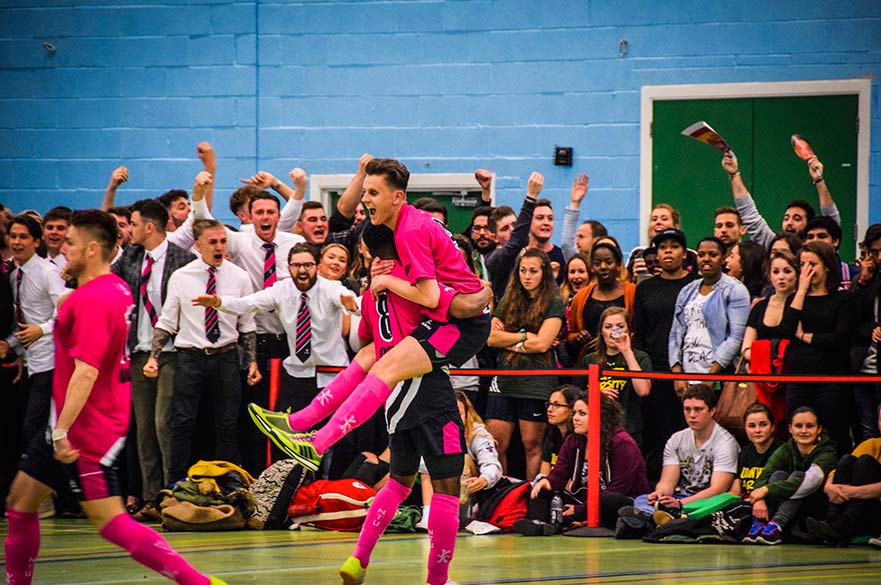 Monday 27 March – Men’s Futsal. FT: UoN 5 – 6 NTU.
It was a fiery start to the men’s game, with NTU determined to get the win after a disappointing loss in the Women’s game. A point was crucial to prevent UoN increasing their series lead further.

Both teams tried to exert their dominance early on, and a clever clearance from scholar James Webb nearly took the UoN keeper by surprise, who just about managed to get back on his line to prevent the goal. Once the teams settled into the game, it was UoN who managed to pounce first, scoring their first goal in front of the very vocal crowd!

Some fantastic goal keeping from the NTU keeper, Micklewright, prevented a second goal soon after, and another crucial save led to a breakaway for NTU, which they took expertly. Webb was able to put Heron in space down the left and he slotted it home to the delight of the NTU fans.

The first goal really settled down the lads in pink and they started to show their class, keeping the ball away from UoN and creating some great chances. It didn’t take long for the pressure to show, with Heron scoring his second with a clever flick behind him and past the goal keeper.

The next big chance fell to UoN, and but for the woodwork they would have drawn level. The game was being played at an electric pace and both teams were showing great skill. With six minutes to go in the first half, it was NTU on the score sheet again, with Kasey Riley finding the net to take the score to 3-1.

After the third goal went in, NTU seemed to get slightly complacent, and in the space of 5 minutes, UoN scored three goals on the break to complete a huge comeback, and go into the half-time break 4-3 up.

A big half-time team talk was needed, and NTU came out firing, creating the first chance of the second half. Timi knew he should have scored, but not long after, he made no mistake to rifle the ball into the back of the net, and bring the scores level again at 4-4. Game on!

NTU were mounting the pressure on UoN’s new goal keeper, causing him to fumble a long range shot. With 10 minutes to go in the game, Webb was on the ball in space in his own half, and he looped it high into the air, landing it in the box to put further pressure on the keeper. A foray of players were fighting for the ball but somehow no-one touched it, not even the goal keeper, and the speculative chip made it’s way into the goal! 5-4 to NTU!

NTU were on top and further chances for Sichone and Miranda nearly increased the lead, with NTU’s new goal keeper Cameron Riley dominant in goal to prevent UoN in a 1v1 where they should have scored.

Five minutes were left on the clock and the atmosphere was tense. A breakaway from UoN down the line led to a pass across the face of the NTU goal, and they really should have scored. Further last-ditch defending from the pinks prevented UoN again, with NTU showing true grit and determination to maintain their slender lead.

NTU needed to hold out for the final 90 seconds, but a volley over the bar from Kasey Riley led to a quick break for UoN and this time they made no mistake. 5-5 with just over a minute on the clock.

Up stepped Sichone… The ball was pulled back from the left to the NTU player who had just come onto the pitch, and he absolutely smashed it low into the far bottom corner. The crowd erupted and the players went wild! The last minute was backs to the wall for NTU, but they managed to hold firm and close out the game – a heroic performance and deserved winners!