Last night, NTU won the annual Nottingham Varsity Ice Hockey fixture at the Motorpoint Arena, in front of 7,500 fans. The series now stands at 5 - 4 to the University of Nottingham at the end of the first week. 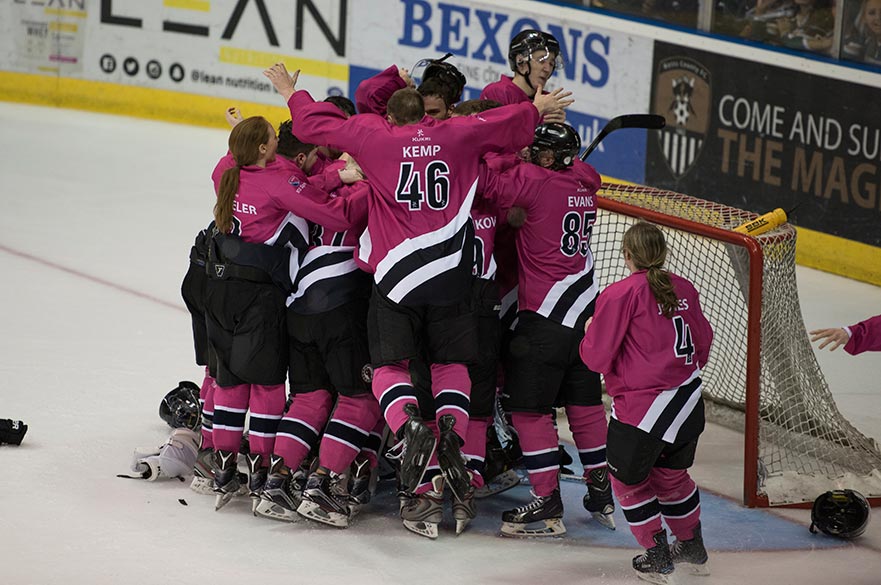 What a night at the Motorpoint Arena! 7,500 fans, dressed in their respective pink and green, descended on the National Ice Centre for the eagerly-anticipated Notts Varsity Ice Hockey, 2017. The day was finally here, and boy did it not disappoint.

It was the green of UoN who started the strongest, hitting the post early on as NTU struggled to get into the game. The NTU goal keeper, Matt Hodgkins, was forced into action very early on, with some great saves keeping the score at 0-0.

Once the nerves started to settle, NTU began to gain some possession, and a quick breakaway from Joe Aston led to his first goal of the game. The NTU crowd went wild! Not long after, the NTU man was at it again, exerting his dominance on the game to score his second goal.

Although they were in control on the scoreboard, UoN had a much greater amount of shots on goal in the first period, and a goalmouth scramble towards the end should have resulted in a goal. NTU somehow managed to clear their lines, going into the first break 2-0 to the good.

It was clear how much the game meant to the players from both universities, with tempers fraying at the start of the second period. Hodgkins was forced into another great save, and Aston didn’t need to be asked twice to score his third goal of the game on the break. A hat-trick for the man in pink!

At 3-0 down, with the NTU goalkeeper performing superbly, UoN were visibly starting to get frustrated. However, they finally got on the scoresheet courtesy of a goal from Aaidan Kwan, only for the crowd to be silenced soon after when NTU scored their fourth. The flurry of goals continued, with UoN pulling one back through Luke Watson to make it 4-2. There were still seven minutes to go in the period, and but for some more saves from both keepers, the scores could have easily increased.

The final period got underway, and with UoN two goals behind, they had to start strongly if they were going to have a chance. Hodgkins was on fire yet again, preventing goals on three separate occasions to keep the score at 4-2. The next goal was all-important, and the Trent Army were delighted to see it go their way. This time it was Jakub Guban with the goal and, at 5-2, the game seemed to be all but won for NTU.

With five minutes to go, UoN managed to get their third goal, scored by Dan Atkinson, and it was a reminder to the crowd that the game was not quite over yet. NTU went into defensive mode, and the pressure was building. The gloves came off with two minutes to go, tensions boiling to the surface, but NTU managed to hold out superbly when the game got back underway. A goal on the buzzer for UoN wasn't enough to prevent a win for NTU, and take the series score to 5 - 4 UoN after the first week.

The trophy was presented to NTU by VP Sport, Matt Nicholson, and Joe Aston was deservedly awarded Man of The Match. Well done lads!