Student develops VR tech to help people, like him, who stutter

An MSc student who has stuttered since the age of six is using virtual reality technology to help rehabilitate people with speech impediments. 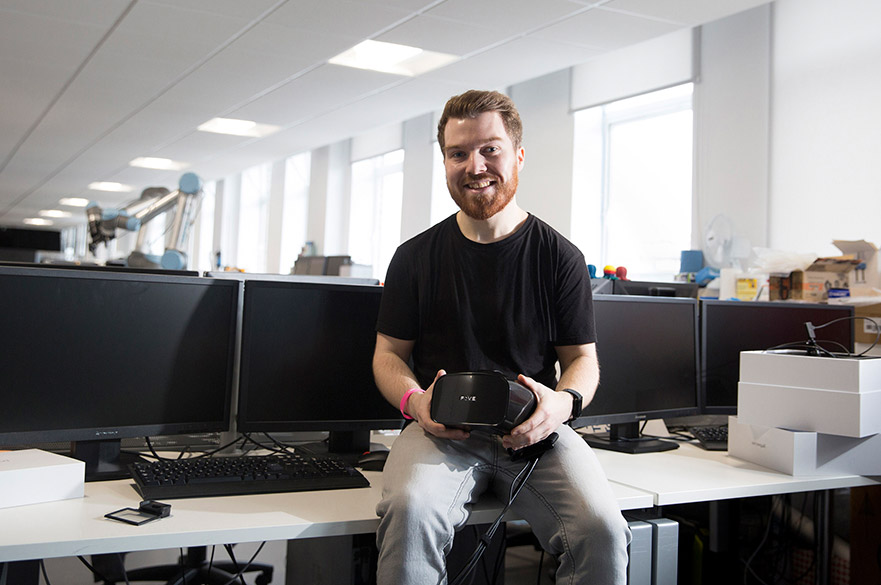 An MSc student who has stuttered since the age of six is using virtual reality technology to help rehabilitate people with speech impediments.

The technology provides exposure therapy for simulated situations which trigger anxiety. By repeated exposure to such situations a person can overcome their fear to better prepare themselves for anxiety-provoking real-life situations.

Gareth’s design – which includes advanced eye tracking technology within a VR headset – includes a range of scenarios and provides feedback on a user’s anxiety levels, showing progress and indicating ways to improve.

“I know first-hand how much impact a stutter can have on a person’s life, so I wanted to do something that has the potential to make a huge difference in the lives of other people who stutter,” said Gareth, originally from Basingstoke in Hampshire, who is studying in the School of Architecture, Design and the Built Environment.

“For a person who stutters, talking in front of an audience, for instance, can be an intimidating and heart-raising task. But with the growing availability of virtual reality technology, people could practice exposure therapy in ways previously unavailable to them from the comfort of their own home.”

The technology would also provide feedback on the wearer’s eye activity, as gaze behaviour plays an important part in stuttering therapy.

“When someone stutters, they can also involuntarily look away from the person they’re speaking to and their eyelids may close or flicker,” said Gareth.

“So it is important to use headsets which track where the person looks during social interactions and whether they look at the person’s face in order to improve their gaze.”

According to The Stuttering Foundation, more than 70 million people worldwide have a stutter, equal to one per cent of the global population.

Gareth’s work is to go on public display for Nottingham Trent University’s upcoming 2017 Degree Show. The show is one of the UK’s biggest displays of graduating art and design talent in the UK with more than 1,200 students exhibiting work.

Professor Philip Breedon, leader of Nottingham Trent University’s Design for Health and Wellbeing Research Group, who supervised the study, said: “Gareth has taken a subject matter which is personal to him and delivered a research project which has the potential to change people’s lives.

“By utilising the growth in virtual reality technology, his research has the potential to help people who experience a whole range of social anxieties, including those who stutter.

“It’s a fantastic example of how design, combined with advanced technologies, has the potential to improve the health and wellbeing of millions of people around the globe.”

Members of the public can obtain further information from Gareth directly via gareth.walkom2012@my.ntu.ac.uk.

Student develops VR tech to help people, like him, who stutter