A new sculpture using live activity from the surface of the sun to illuminate a building has been unveiled in Nottingham - incorporating research by Nottingham Trent University physicist Dr Martin Bencsik. 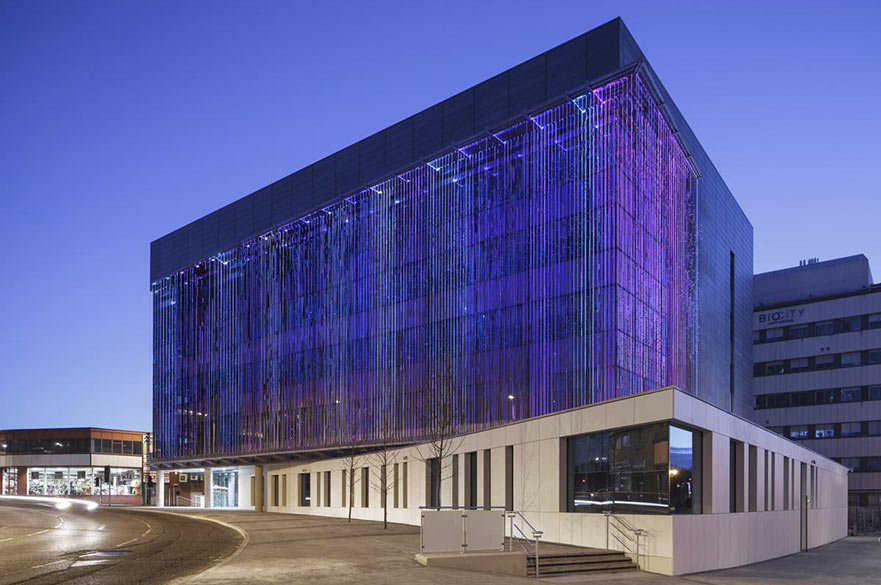 A new sculpture using live activity from the surface of the sun to illuminate a building has been unveiled in Nottingham. The artwork, which incorporates research by Nottingham Trent University physicist Dr Martin Bencsik, will adorn the front of the new £30m BioCity Discovery Building on Lower Parliament Street as a brise soleil.

The artwork named ‘Corona,’ meaning a coloured halo or an electrical glow, is the work of Nottingham artist and NTU fine art graduate Wolfgang Buttress. It will light up at night and by day act as a sunscreen for the building, making the building more energy efficient.

The sculpture is linked to 2 NASA satellites which monitor the surface of the sun for solar flare activity; this energy is expressed through an ever-changing fibre optic lighting system which reflects the sun’s activity in real time on the facade of the building. The colours will evolve and transform over a 26 ½ day period – the time it takes the sun to rotate on its axis.

Dr Martin Bencsik said: "Corona uses live data from the sun which is made available to us by NASA. The result is a spectacular ever-changing light pattern that reflects the sun’s status in the latest 24 hours. It will never appear the same at any two moments in time and so each viewing is unique."

The new five-storey building will support more than 700 new bioscience roles in the city over the next 30 years, building on the exciting work and innovative research of existing BioCity tenants and cement Nottingham’s position as the UK’s fastest growing life sciences community.

D2N2 has been allocated around £192million in LGF funding to spend over six years (up to 2020) across its area, on infrastructure projects which directly promote economic growth and jobs numbers.

30,000ft2 of the 50,000ft2 lab and office space has already been taken up by expanding BioCity tenants Sygnature Discovery, the UK's largest independent provider of integrated drug discovery resource and expertise, who have outgrown their existing space at BioCity Nottingham.

Councillor Jon Collins, Leader of Nottingham City Council, said: “It speaks volumes to Nottingham’s progress that we are able to open not only 50,000ft2 of new lab space, but we have a unique display of what scientific discovery can create from such a renowned artist as Wolfgang.

“We are very grateful to Wolfgang and Martin for their creativity and dedication to producing something special for Nottingham, which visually highlights not only our commitment to biosciences but also to an attractive and innovative city centre.

“We have been keen to work with BioCity and Wolfgang to develop this building and highlight that we support the growing and innovative life sciences sector and our local artists in Nottingham.”

Dr Glenn Crocker, CEO of BioCity, said: “We are all delighted that the collaboration between Wolfgang Buttress and Dr Martin Bencsik has produced such an exciting and inspirational artwork for BioCity's Discovery Building.

“This is art that the whole city can enjoy and I'd like to thank Nottingham City Council for making this possible. There are some who see the arts and sciences as distinct, almost polar opposites but that is not the case and this installation reflects that perfectly.

"The sheer magnitude of the project will inspire us all on a daily (and nightly) basis, with the dynamism of the structure chiming perfectly with our business model and the companies that are growing at BioCity."