A new digital exhibition created by Nottingham Trent University and the National Holocaust Centre and Museum will tell the story of how the Holocaust has been remembered - and forgotten - since World War II. 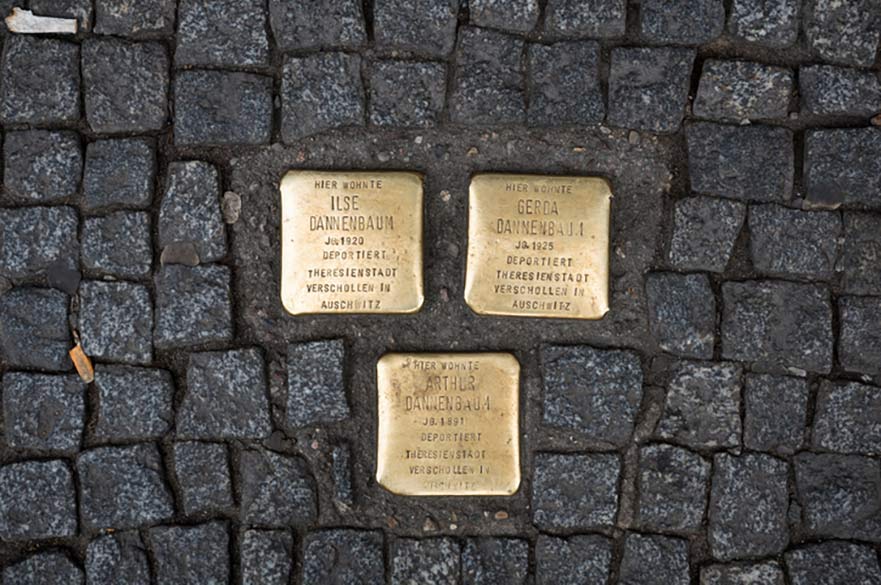 Holocaust memorial plaques on the pavement in Berlin

A new digital exhibition created by Nottingham Trent University and the National Holocaust Centre and Museum will tell the story of how the Holocaust has been remembered – and forgotten – since World War II.

Legacies of the Holocaust will be launched at the National Holocaust Centre and Museum on Sunday 14 May and will be available to view in full at the Centre, with highlights also online.

The exhibition tells the story of how the Holocaust was remembered, forgotten and marginalised in post-war consciousness. It shows how memory of the Holocaust gradually became more important in Germany, Israel, the USA, and in Europe and seeks to explain the shifts, tensions and patterns in Holocaust memory, which often stood at odds with national memory in countries which preferred to look more positively on their past.

Curated in conjunction with NTU research assistant, Elizabeth Ward, and postgraduate students from the University’s School of Arts and Humanities, Legacies of the Holocaust covers several themes including the liberation of the camps; the important events in Holocaust memory; the role of witnesses in educating future generations about the Holocaust; how the Holocaust has been remembered in films, museums, memorials, and literature; and Britain’s role in the Kindertransport.

Professor Bill Niven, Professor in Contemporary German History at Nottingham Trent University and a founding member of the National Holocaust Centre’s academic advisory board, led the University involvement in the project. He will open the exhibition at 1pm on 14 May with a talk at the Centre on Holocaust Memory: Chances and Challenges.

He said: “The Holocaust is a historical event, but it is also a remembered event. It shattered our faith in humanity, leaving a legacy of pain, injustice, and incomprehension. Yet for many years after the war, the Holocaust did not stand at the centre of memory as it does now. There was often a desire to forget, and evade responsibility for, the Nazi genocide.

“Today, we remember the Holocaust so that we can learn from it: there is a legacy of responsibility resting, or rather pressing with urgency on all of our shoulders to make sure that such an atrocity cannot happen again.”

Plans are also under way to liaise with teachers over how the exhibition can be used in secondary school teaching to help raise awareness of the way we remember the Holocaust and the ways in which it has been represented and understood over time.

Highlights of the exhibition can be viewed online