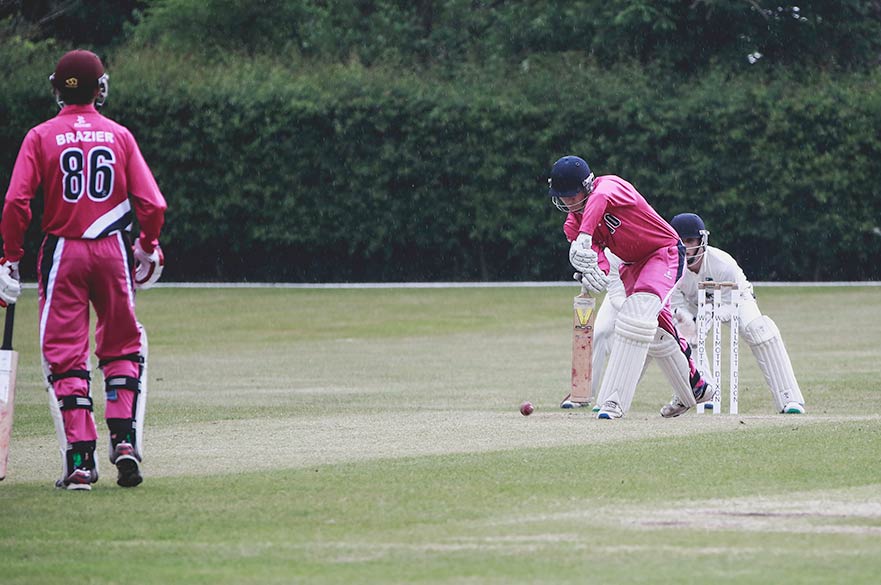 NTU and UON arrived at Clifton Village Cricket Club on a mild Friday afternoon under blue skies. With the series score 11-7 in UON’s favour and only four events left, the boys in pink only had pride and bragging rights to play for, whilst their opponents were looking to avenge their 100-run hammering 12 months ago.

Sadd opened the bowling for UON, and despite a couple of edges it was a productive start for NTU with ten runs being scored. Off-spinner Charles started proceedings at the other end and almost had the first wicket when Brazier top-edged a sweep over fine leg’s head. He and Paine also nearly had an embarrassing mix up between the wickets but both arrived at opposite ends safely; the vociferous crowd possibly making it difficult to hear the other.

In the next over, Paine was dropped in the covers and the pink half of the crowd made the guilty fielder know how big a chance that was. Those same boisterous spectators would soon be silenced however, as Paine fell in the subsequent over: caught in the covers by Shah off the bowling of Charles. The celebrations of the players and the green section of the crowd showed how important that wicket was to them. It could have been even better for UON had the new batsman, Dan Wood, been caught in the slips, but instead the ball went down.

By now, the blue skies had disappeared and the replacing grey skies had brought rain with them. Wood struck four fours to take the score to 47-1, but the intensity of the rain reached such a point that the umpires called a halt to the game after 5.5 overs. The players fled for the shelter of the pavilion whilst the covers were quickly brought on to cover the pitch.

The rain became so heavy that puddles started to appear in the outfield. After twenty saturating minutes, the rain subsided to spitting then ceased all together. Now it was a test of the ground’s draining abilities. The minutes went by as the spectators and players waited patiently for a decision to be made. Despite prospects of play looking bleak after the monsoon, there was some optimism that the game would resume. 5.30 (an hour after play had stopped) was mentioned as a possible start time, but that passed by with no sign from the umpires. Eventually, at 5.50, an announcement was made: a final inspection would be carried out at 6. The match would then either be abandoned or reduced to six overs-a-side.

The umpires walked out not long later and unfortunately deemed the ground too wet still, and the match was abandoned. So after an hour and a half after being originally interrupted, the weather was the winner.