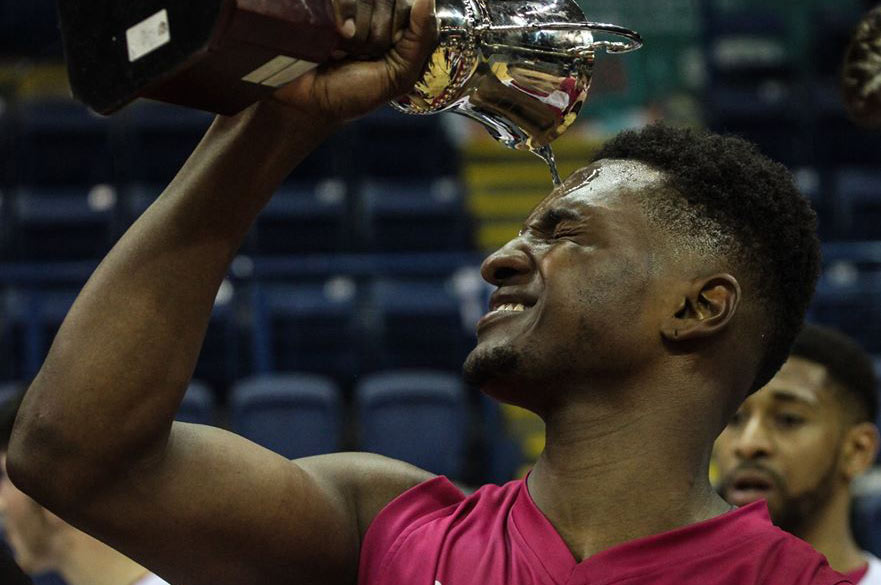 Nottingham Trent Men’s Basketball team won a fiercely contested Varsity match over the University of Nottingham on Tuesday night at the Motorpoint Arena. A topsy-turvy encounter, in which both teams had double digit leads, was finally settled by a late burst in the fourth quarter to seal Trent back-to-back wins in the men’s Basketball varsity fixture.

A stirring rendition of “God Save The Queen” got the packed crowd at Motorpoint Arena in the mood for the contest ahead, and Trent scored a basket within the first five seconds of action to set the decibel level even higher. Both teams appeared nervous out of the gates, as missed free throws and turnovers plagued the early moments, leading to a rather stuttering quarter of action. Trent centre Tom Ballantine was establishing himself in the post with great authority, though, and a nice move bought him an old-fashioned 3-point score, in a rare offensive highlight for Trent. However, it was to be a first period of little joy for Trent, as the offence struggled to find any rhythm, and UoN’s dynamic and elusive guards were picking holes in the Trent defence. A basket on the buzzer from UoN summed up the struggles Trent were having, and they trailed 22-15 after the first quarter.

A mesmeric routine from Trent Dance in-between quarters allowed coach Ryan Westley to regroup his troops after a disappointing start, and Trent came out revived with an added intensity to begin the second quarter. With UoN’s skilful guards getting some rest after their first quarter efforts, Trent were able to disrupt their rhythm on offence, denying them passes and stifling their attack. In the first three minutes of the quarter, Trent forced four turnovers alone, and every shot UoN did manage to get up didn’t get anywhere near the basket. Tom Ballantine continued to dominate and blocked three shots, aided by stout defensive performances from Tristin Jaceonmi and Euan James off of the bench. UoN responded in the closing moments of the quarter though, rallying themselves after falling behind, to go on a 9-2 run. This left a tantalising second half in prospect, leading 38-33.

Both universities cheerleading groups showcased their immense talent during the half, Trent in particular dazzled with some expansive formations and dramatic lifts, and both received rapturous applause from the crowd.

The third quarter belonged entirely to Trent and, in particular, their forward Ryan Stewart, who was a force of nature on the offensive and defensive end. Special mention must also go to scholar Janes Casimiro, who played every minute of action and played both ends of the floor with dynamism and effort unmatched by any other player on the court.

Trent were magnificent on defence in the third, rebounding and hustling for every loose ball, drawing fouls and grinding the UoN team into despairing possession after another. A devastating run from midway through the quarter for Trent, where they scored 12 points on the bounce, was down to a concerted team effort to drive to the hoop and commit bodies to the offensive glass. A buzzer beater 3-pointer from Stewart sent the engrossed crowd into delirium to end the quarter, with Trent opening up a 56-47 lead.

After trading early baskets in the fourth quarter, Trent’s offense fell away, turnovers again costing them their chokehold on the game. UoN, to their credit, were phenomenal in getting their crowd into the game after Trent had quietened them in the third, with hustle plays and steals to pump them and their supporters up. The crowd hit fever pitch when UoN regained the lead with five minutes remaining after a 3-pointer from their point guard. Janes Casimiro limped off with what looked like a serious injury, and here’s hoping it isn’t as serious as it looked.

Trent opened up a five point lead again though, after another composed run, and the game looked dead and buried at 69-64 in Trent’s favour. Two crazy turnovers allowed UoN to score two baskets in the space of fifteen seconds and suddenly it was a one point game again.

Euan James, Ballantine and point guard Emils Enkuzens refused to be bested though, James in particular scoring clutch baskets and playing terrific individual defence in the most intense moments. Trent’s composure and championship mentality ultimately saw them through this adversity. James drove with force to the rim and finished with a left handed lay-up to push the lead up to five again. UoN on their very next possession missed an easy lay-up themselves, allowing Ballantine an open lane in transition to seal the game.

A heroic defensive effort sealed the victory for Trent, and they duly celebrated their incredible efforts when the final buzzer sounded, ending a contest that will live long in the memory for all who were there.