Notts Varsity - Men's Football make it six in a row 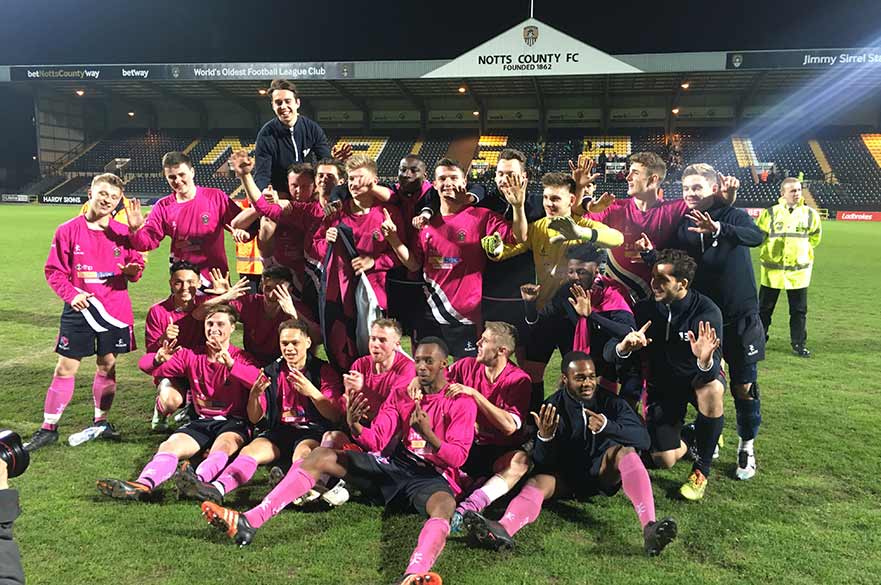 A win for the women’s team had got the crowd going at Meadow Lane, and now it was up to the men to follow suit, hoping for their sixth consecutive Varsity win. A lightning start from NTU set the tone for the match, and UoN were unable to recover, resulting in a fantastic 2-0 victory for the men in pink.

NTU recently beat UoN in the Premier North promotion play-off fixture, which resulted in promotion for them, and relegation for UoN. As a result, UoN were fired up before kick-off, eager to get some revenge.

It took just three minutes for NTU to get on the scoresheet, with a header at the back post from Josh Barr-Rostron beating the keeper to make it 1-0. The NTU crowd were in full-voice, drowning out their counter-parts who had arrived in much fewer numbers.

NTU were completely dominant, with chances to extend the lead further. Josh Wright headed it over the bar, and then a few minutes later forced a save from the keeper from long range. However, he made no mistake on 29 minutes, when Barr-Rostron crossed it from the left wing, putting it on a plate for Wright to volley it home. 2-0 and it could have been more, with clear-cut chances for Duffy, O’Malley and Barr-Rostron before half-time.

The NTU lads were first out of the tunnel after half-time, buoyed by the crowd to consolidate their lead in the second half. After looking shell-shocked in the first half, UoN started much more positively, and the referee judged there to be a push on the striker as he competed for the header, resulting in a penalty on 50 minutes.

Up stepped last year’s NTU captain, Tom Hayes, now donning the green and gold of UoN. He was up against Jake Wood in the NTU goal, and much to the delight of the crowd, Wood pulled off a great save down to his right.

The penalty miss was a huge moment, and UoN grew ever more frustrated as the game went on. Further chances for Duffy and Reid kept NTU on top, and the defence were resolute, preventing many chances for UoN. Their best chance came on 73 minutes, when their striker broke down the right. A shot to the near post was easily saved by Wood, and it looked like NTU were heading to their sixth successive Varsity victory.

With a few minutes to go, a crushing tackle from Reid sent tempers flaring, and the referee had to intervene to calm the players down. Credit to NTU, they had completely outplayed UoN all game, and they fully deserved the win, 2-0.

Notts Varsity - Men's Football make it six in a row