Notts Varsity - Men's Rugby round off a fantastic season 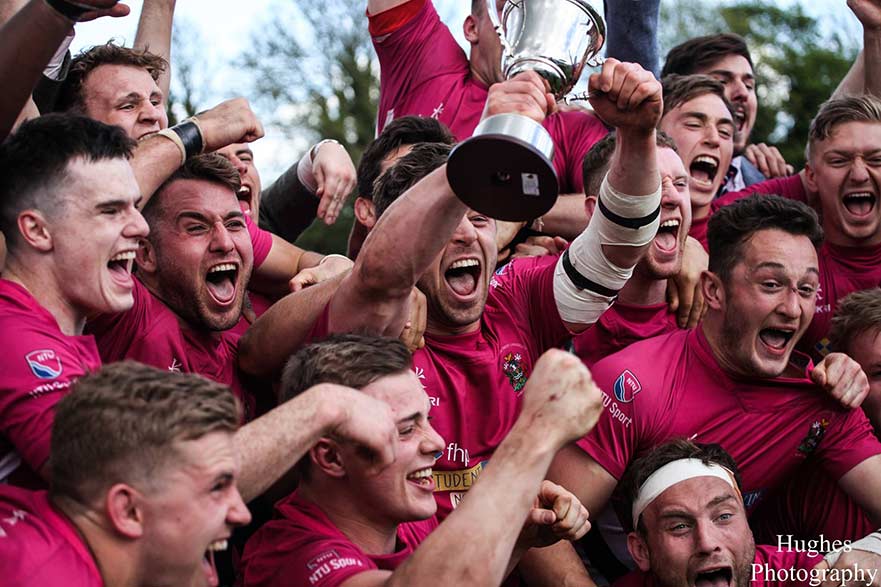 Men's Rugby Varsity Champions (Jack Hughes Photography)
A fantastic season for NTU Men’s Rugby was rounded off in style yesterday afternoon, as they were once again crowned Notts Varsity champions.

It wasn’t all plain-sailing for NTU, who were were very slow to get going in the game. With only two minutes on the clock, UoN were celebrating the first try of the game, taking the score to 0-5 after an unsuccessful conversion attempt. This wasn’t in the script, and NTU needed to react quickly.

A kick to the corner, followed by a well-executed line-out, set up a driving maul aimed for the UoN line. Brownlie came close, but UoN managed to prevent the try. A few phases later it looked like NTU had found the score, but the referee disallowed Williams’ try, bringing them back for a forward pass from Will Sutton.

UoN were able to clear their lines, and then it was their turn to set up a driving maul in the opposition’s 22. NTU couldn’t put a stop to the maul, and UoN managed to fall over the line, scoring their second try of the game. The conversion was unsuccessful again, making the score 0-10.

NTU looked shell-shocked, and you could sense the nerves setting in. There was a knock-on from Jamie Jack, and a missed penalty from Josh Knight, and it looked like nothing was going NTU’s way. That was until the referee sent two UoN players to the sin bin within the space of minutes, setting up a scrum for NTU in a very commanding position.

Poullet broke from the back, forcing his way over the gain line and putting UoN on the back foot. Some quick hands put Cardall in space, and he crashed over the try line, much to the relief of the NTU fans. Knight added the extras to make it 7-10.

Although NTU had managed to pull one try back, it was still UoN who looked the most threatening in attack. A penalty was successfully converted to make it 7-13, and they could have had a third try, but for a drop at the crucial moment following a break from their open side flanker. Just before the half-time whistle, the NTU pack managed to force a penalty in the scrum, gratefully taken by the kicker Knight, making the score 10-13 going into the break. A much better performance was needed in the second half!

The half-time break was just what NTU needed, and the crowd were treated to a commanding display in the second half. With 50 minutes on the clock, NTU made the break through. Poullet caught the line-out and MacCarthy powered through the UoN defence to score their second try of the match. It was Sutton this time who added the conversion.

Not long afterwards, NTU were at it again, eager to make up for their sub-standard first half performance. This time it was Brownlie off the back of a maul, taking the score to 22-13 as Sutton hit the post.

NTU were now showing the great form they have been in all season, and their nerves had seemingly disappeared. A chip over the top from scrum-half, Hargreaves, found the winger, Williams, who managed to get over the whitewash. Sutton was on target, taking the score to 29-13.

The final try of the game came from the inside centre, Ryan Headlington, who was put away on the wing by Jack Spittle who had drawn the last defender with the pass. In the clear, Headlington celebrated as he crossed the line, diving under the posts.

A nervy start had initially put the victory in doubt, but NTU’s class shone through in the end, and the game ended 34-13.

Notts Varsity - Men's Rugby round off a fantastic season