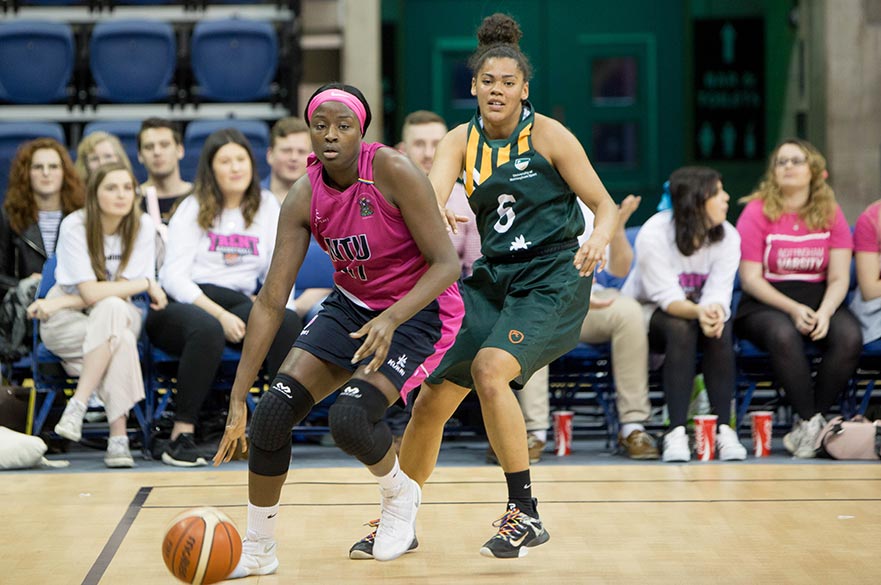 Nottingham Trent women’s Basketball team fell to a battling defeat on Tuesday evening against the University of Nottingham in the Varsity Series. Despite holding a lead at the half thanks to an inspired second quarter performance, Trent weren't able to match the dynamic offensive ability UoN possessed. Nygilia McClain was sensational for Trent, hitting five three-pointers in the game, whilst Vanessa DaSilva was fantastic off the bench in grabbing rebound after rebound.

After winning the tip and sinking the first three-pointer of the contest, Trent’s physicality early on in the game caused UoN some real problems, with Tea Charlton and Camille Bersier forming a formidable presence at the rim. UoN had some crafty players though; their current Sportswoman of the Year Eleanor Bishop was able to unlock the defence on a couple of occasions with some sweet ball movement; along with nailing two three-pointers to give UoN a 19-9 lead after the first quarter.

The Trent team rallied magnificently in the second quarter, some early pick and roll action between McClain and Charlton helped start the comeback. Coupled with a swarming defence and rejuvenated offence led by an inspired McClain, Trent took the lead with back to back three-pointers with 1:21 left in the half. McClain had 10 points alone in the quarter and 13 in the half. UoN looked like a stunned team, the ball movement that was so accurate in the first quarter was sinking without a trace, and by the time the buzzer sounded for the half, Trent had wrestled a 32-31 lead.

During the interval, the crowd were treated to a showcase from the Trent Dance group. A captivating performance filled with energy, rhythm and fluidity was a joy to behold!

The start of the third quarter was a very nervy affair; both teams turning the ball over on multiple occasions and struggling to find any flow to their play. UoN finally rediscovered their magic touch, with the ball zipping from player to player to open up Rachel Byrne, who nailed a straight on three-pointer.

The match-up between the two point guards, McClain of Trent and Bishop of UoN, was riveting throughout, both displaying wonderful ball handling and shooting ability. A chase down block from McClain to deny UoN a certain bucket midway through the third quarter was an unbelievable play, and two minutes later McClain hit a three-pointer to keep the scores close. By the end of the quarter though, Trent had only added eight points to their half time score. On the other side of the court, Rachel Byrne of UoN scored all 14 points for her team, a truly incredible effort, to leave Nottingham 45-40 to the good.

To begin the fourth, Trent forward Vanessa DeSilva scored the first five points for Trent to pull them within two. However, with some key missed free throws, Trent remained scoreless for another three minutes to allow UoN to seize control of the contest again and build a 10 point lead with just over five minutes remaining. McClain and her team weren’t done yet though, and a 9-2 run by Trent took the game down to the wire with two minutes remaining.

The crowd were right into the game now, chants of “Trent Army” and “Defence” sounded around the Motorpoint Arena, and at 56-59 with 50 seconds remaining, Trent had given themselves a chance at pulling off an unlikely victory. However, a key turnover on a potential game tying possession allowed UoN to march down the other end of the court and hit a crushing three-pointer with 17 seconds left to ice the game and claim the win, 62-56.

Moment of the match: McClain’s chase-down block on opposite number Eleanor Bishop will live long in the memory