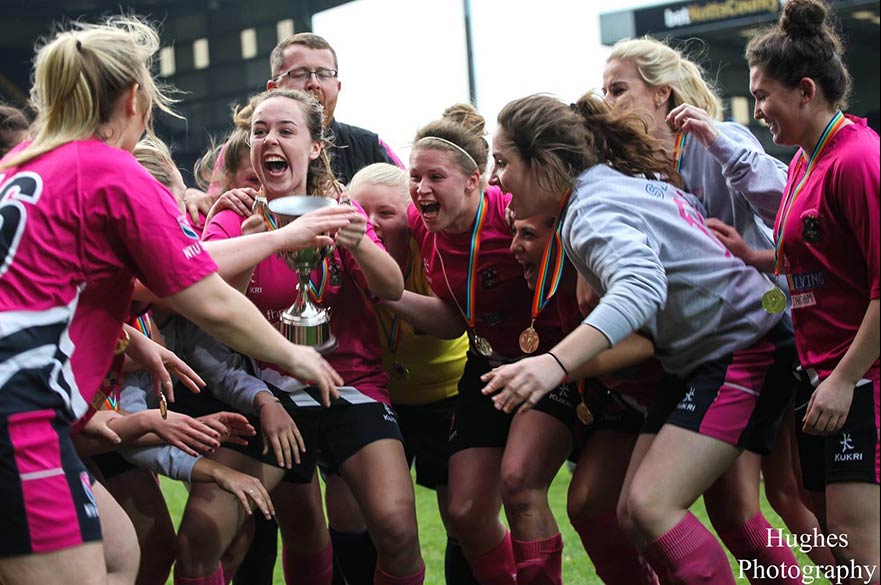 With the series score at 5-11 before the start of play, it was important that our Women’s Football team got off to a good start in front of a growing crowd at Meadow Lane. The NTU support massively outweighed that of UoN, and they did a great the job to spur on the girls as they took the win in a nail-biting 1-0 victory.

It was a very cagey start to the game, with neither team creating many chances. NTU’s best chance came from a long range shot from Broad, but the keeper dealt with it easily. Wood was also causing problems down the left wing, but her cross couldn't find a teammate in the box.

As the clock hit 33 minutes, the NTU crowd went wild. NTU striker, Illsley, spotted the UoN keeper off her line and tried her luck from range. The keeper was back-peddling and managed to get her glove to the ball, but it wasn’t enough to prevent it from landing in the back of the net. 1-0 NTU!

UoN reacted well to the goal, and started to dominate the possession. However, Aja Aguirre was in top form in the NTU goal, making two saves in quick succession to keep the score at 1-0. With one minute to go in the first half, the defence were called into action once more, with a great clearing header from Tamsone to end the half.

It was UoN who started the better of the two teams in the second half, and Aguirre came to the rescue again, showing speed off her line to slide onto the ball in a 1v1. NTU’s best chance fell to Broad, after a long ball over the top from Twigge put her into space. With just the keeper to beat, the crowd were up on their feet, but the shot went narrowly wide.

NTU managed to see out the game well, but for a few nervous moments towards the end. A cross from the wing lead to a shot on goal from the UoN striker, but captain Georgia Richards was well positioned to make the block.

After what seemed like forever in extra time, the final whistle eventually sounded, and the girls celebrated a well-deserved Varsity win.