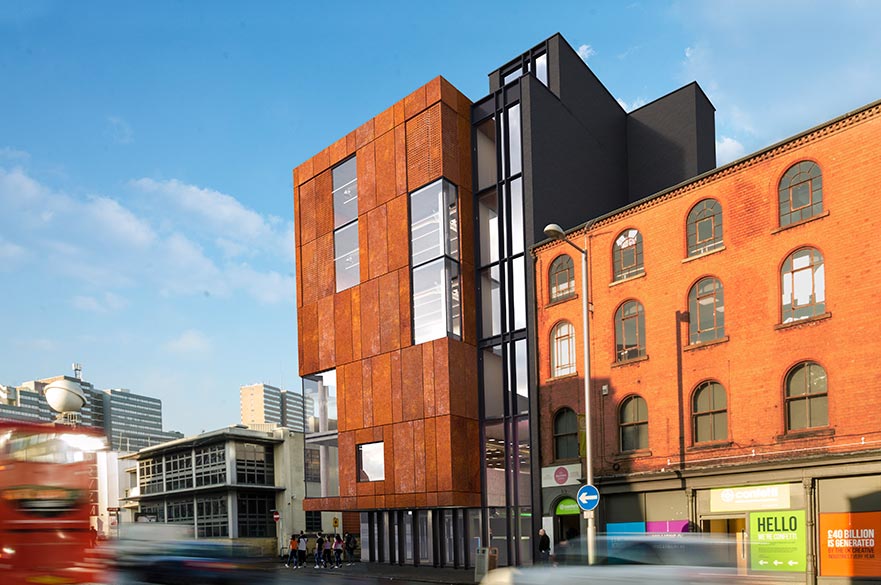 An artist's impression of the new building

The development will see the Convent and Parliament Street sites linked by a stunning seven-storey education centre, enabling Confetti to deliver more courses to more students studying for both college-level courses and degrees.

The new “hub” will become a flagship part of Nottingham Trent University’s “Creative Quarter Campus”. It will be the Confetti Institute’s main site and will feature spacious contemporary classrooms and studios, a large Learning Resource Centre with private study facilities, creative social spaces and a rooftop garden.

In addition to acting as Confetti’s headquarters and main reception it will deliver all digital media games and interactive activity. The new hub will connect the existing Confetti college centre on Convent Street and the Higher Education Centre on Parliament Street.

It will continue in the Confetti tradition of providing a professional, welcoming and creative environment for students from school leavers to postgraduates, in the heart of Nottingham’s Creative Quarter.

Award-winning architects Allan Joyce spent 10 months designing the building. The striking design is expected to become a landmark of the city centre. The building is also hoping to achieve BREEAM “Excellent” status. The architects have designed it to be one of the top three environmentally sustainable buildings in the city.

Work began before Christmas demolishing part of the existing Confetti site on Parliament Street to make way for the new build. The demolition unearthed some key archaeological findings, including medieval artefacts, caves and a 700-year-old well which have helped rewrite the history of medieval Nottingham and provide information about the way the area was used over 700 years ago.

The findings have now been documented and preserved and the land filled in ready for constructors Stepnell’s Limited to begin the build.

Following a 23-week procurement process, NTU and Confetti awarded the principle contract to Stepnells, in part, because of their understanding of the need to keep disruption to students to a minimum. As such, they have project planned major works to take place outside of term time including evening and weekends so that the impact on students is low.

Craig Chettle, Chief Executive and Founder of Confetti Media Group said: "The development of the site is long overdue and will bring a much needed boost to the city centre - both economically and aesthetically. Our plans for the space are ambitious and as well as training our talented young people, we hope the transformed building will become a landmark for the city."

Professor Edward Peck, Vice-Chancellor of Nottingham Trent University said: “I am delighted to be able to confirm NTU’s support for this initiative. I very much view this development as our “Creative Quarter Campus”.

"It will expand Confetti’s further and higher education offer, increase the number of course options available to students and will generate positive social and economic benefits, not just for the students fortunate enough to study there, but for creative businesses within Antenna and Nottingham’s Creative Quarter”.

Building work began on 8 May with completion expected by summer 2018.