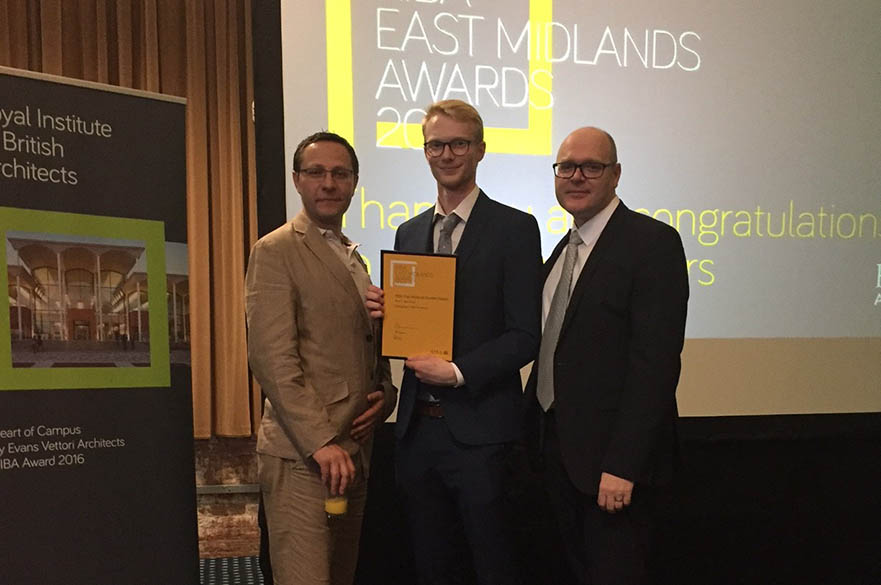 The RIBA Part 1 award is presented as part of the annual RIBA East Midlands awards, with prizes such as this recognising exemplary work completed whilst in undergraduate education. Universities from across the region submit final year students’ work to a panel of experts, who assess and judge the submissions.

Ben's work, titled 'Infrastructure for Post-Capitalism', focused on the design of a temple which represents a physical symbol for change; prompting reflection on people's own capitalist views, and encouraging collaboration and creation.

Impressive as the award is on its own, Ben’s achievement testament to his hard work and the result of sheer determination. After considering leaving university during his first year, Ben hopes that his award can inspire current and future students by showing that hard work can lead to recognition and reward.

Now an Architectural Assistant at Benoy, Ben was initially shocked to win, “When I got the email telling me that I had won, I was more confused than anything. I had to get a friend to read it just to make sense of what had happened. I was completely unaware that I had even been entered for the award, so the jump to having won a regional RIBA award was quite a big one!

“It was great once I realised what had actually happened though. It was a genuine honour to have received such an award, but more so that I was able to have an impact on other students.

Ben also recently returned to NTU to deliver a talk as part of the School’s Architectural Exchange event about life in industry as a recent graduate.

“In the time since winning the award, I’ve had the opportunity to talk to many students who will be graduating this year and it’s been great to see that my project has encouraged them to push harder and harder.”

Take a look at Ben’s alumni profile to find out more about his experience at NTU.