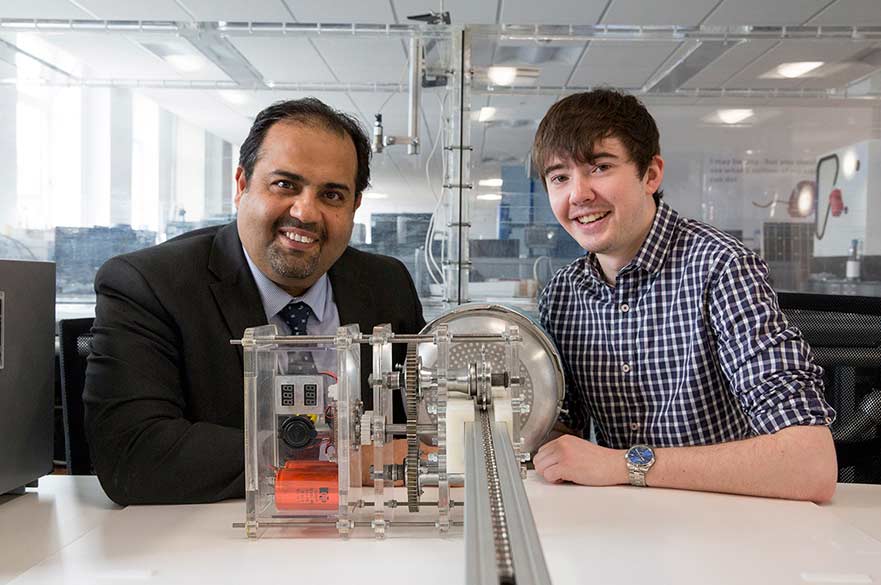 BSc Product Design undergraduate Owen Griffiths and Professor Amin Al-Habaibeh, a professor of intelligent engineering systems, made it to help people in developing countries with poor access to electricity.

Designed for near-shore use, it can generate 5.6 watts from a regular supply of 20 centimetre high waves, making it capable to power a regular mobile charger.

A working prototype went on show for the university’s 2017 Degree Show from 3 to 10 June following experimental work in the institution’s wave machine.

Owen, 23, originally from Dore in Sheffield, Yorkshire, said “Many developing countries have a limited electrical network, particularly those like the Philippines which are spread over a number of islands.

“But a small-scale product like this, partly made from reused goods which are widely available, could help provide power to coastal areas which otherwise may not have a wide access to electrical energy.”

A demonstration of the technology

A pressure cooker – which by virtue of its design is sealed air tight and floats on water – is used as a buoy to bob up and down with the waves.

A rack – made from an aluminium extrusion channel – is fixed to the pressure cooker lid and creates linear energy as each wave passes beneath.

Encased in either side of the aluminium extrusion channel are lengths of bicycle chain which are used as teeth for the rack.
Two bicycle sprockets are used as pinions and interlocked with the chains to convert the linear energy to rotational energy.

As the rack moves upwards with a wave, the first sprocket turns and powers the generator while the second is disengaged, like when a cyclist freewheels on a bicycle.

As the rack moves downwards when the wave passes, the second sprocket turns and the first is disengaged. This allows the harvester to maximise its efficiency by generating power from both the rise and fall of each wave.

After turning through a series of gears to increase the centrifugal force, the rotational movement spins a small generator at 151 rotations per minute (RPMs) which creates electricity.

Mobile phones or other electrical equipment can then be charged from a connection to the generator.

Professor Al-Habaibeh, of the university’s School of Architecture, Design and the Built Environment, said: “This project shows how everyday items widely available around the world, which are often thrown away when no longer used, could be transformed into devices which can generate useful amounts of renewable energy.

“As well as being of use in some developing countries, this technology has the potential to be scaled up to create larger quantities of power in countries such as  the UK, which has a large amount of natural energy produced by a regular supply of waves from the North Atlantic Ocean.

“It’s a great example of research-informed teaching, providing the students of today with the skills and knowhow to change the world of tomorrow.”