The horticulture students worked with an award-winning garden designer on the project. 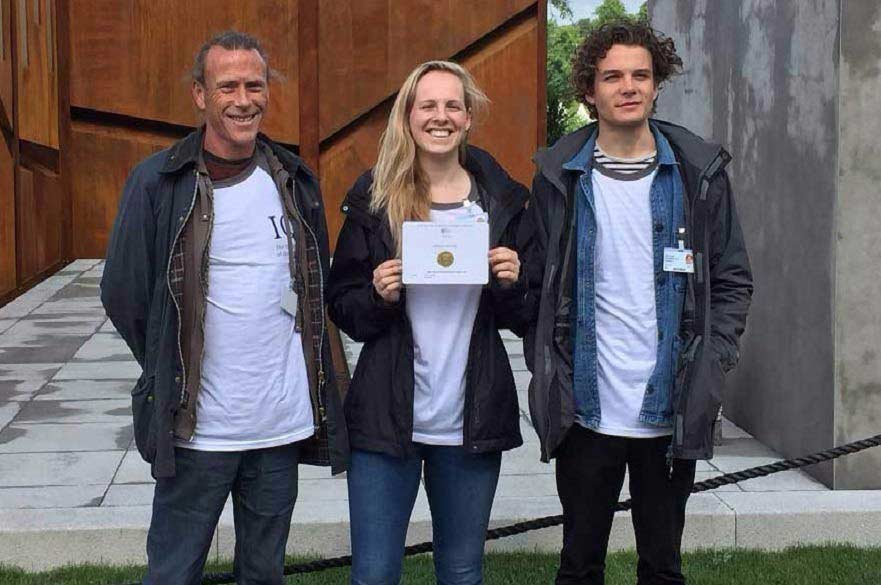 Students with their prize

A show garden inspired by horticulture students at Nottingham Trent University has scooped a hat-trick of awards at the first RHS Chatsworth Flower Show.

The ‘IQ Quarry Garden’, which celebrates the essential role of quarrying and mineral extraction in modern life, won Best in Show, a Gold Medal and Best Construction from RHS judges.

Four students from the university’s Brackenhurst Campus worked on designing the garden as part of a project set by the Institute of Quarrying, which is celebrating its centenary year.

At 480m2 the quarry garden is one the largest ever RHS show gardens and the judges were impressed by the story it told.

The garden, which showcases the landscape and wild habitats that quarrying creates, has three zones.

There is a floriferous and naturalistic area featuring slate monoliths, wild flowers and plants often associated with former extraction sites.

Next is an open, modernist sunken concrete pool and finally, a structured paved area bordered by a sculptural artwork.

The horticulture foundation degree students, from the university’s School of Animal, Rural and Environmental Sciences, attended the show to see how a garden of this scale is put together.

Earlier this year the students were approached by the Institute of Quarrying to work on the project.

They were given a brief for the project and created mood boards, drawings and 3D plans of their ideas.

Their plans were presented to a panel of judges and to award-winning garden designer Paul Hervey-Brookes, who produced the final design for the garden.

Leonie Brown, a lecturer in horticulture, in the university’s School of Animal, Rural and Environmental Sciences, said: “The students have had a marvellous opportunity to be part of the show garden process - greatly adding to their experience and learning.  It has been an pleasure and inspiration to work with the Institute of Quarrying and Paul Hervey-Brookes.”

Paul Hervey-Brookes said: “The garden design is an expression of how nature and extraction sits comfortably alongside each other. It features mass produced products manufactured from extracted materials, natural slate, concrete and steel, as well as hard landscaping materials made from recycled and reclaimed materials. I’m very proud of what we have achieved and I’m delighted that this has been recognised by the RHS.”

Miles Watkins, president of the Institute of Quarrying, said: “This is a wonderful way to mark one hundred years of IQ. Taking on a show garden is a major undertaking and to receive Best in Show and a Gold Medal is recognition of all the hard work and endeavour that has gone into making it a reality. That includes the superb project management undertaken by the team at IQ and the dedication of our garden designer and his build team, as well as the support that the project has received from across the sector.”