Emma Bucknell, a BA (Hons) Product Design student, came up with the idea for the saucepan after seeing her own grandparents struggle with arthritis. 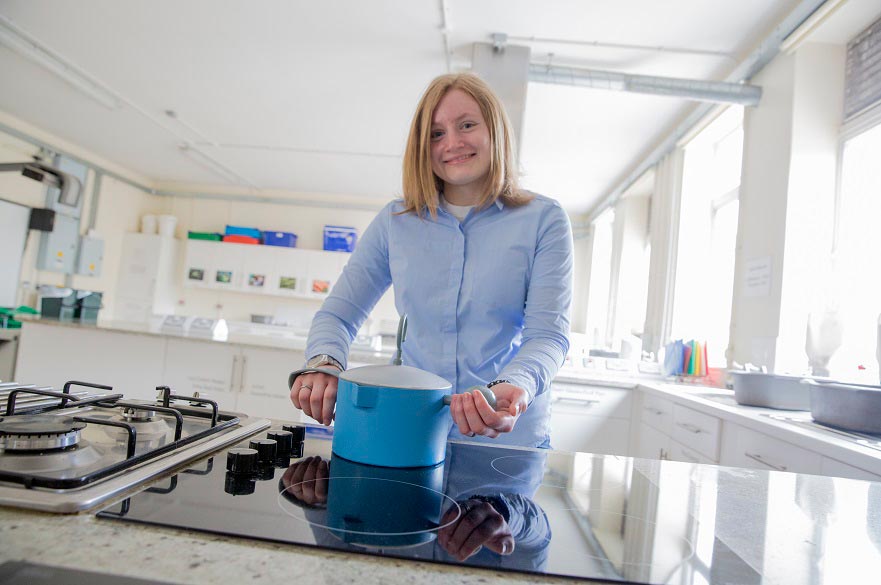 Emma Bucknell designed the saucepan so it is easier to hold

A saucepan to help elderly people with arthritis keep their independence has been designed by a student who was inspired by her grandparents.

Emma Bucknell, a BA (Hons) Product Design student at Nottingham Trent University, has designed the saucepan to make cooking more comfortable for people who have arthritis in their fingers, hands and wrists.

It has been made with a plastic handle on one side so users can slide their hand through it, meaning the saucepan can be lifted using the strength in the arm rather than in the hand.

The design of the handle aims to reduce the weight and pressure that is put on people’s fingers and hands when they lift saucepans, which traditionally have straight handles.

Emma, a student in the School of Architecture, Design and the Built Environment, said she came up with the idea for her product after seeing her own grandparents struggle with arthritis.

She said: “I know from my grandparents that arthritis is a painful and uncomfortable condition. My nan struggles with lifting saucepans so I took the opportunity to find a solution to help them.”

During her research into arthritis Emma said she discovered that long thin handles can be a problem for people who have the condition or a weak grip, because the hand has to form an unnatural position while holding on to them.

The saucepan is made out of aluminium so it is light to hold and the handle is designed to fit a wide range of different sized hands for the most comfortable use.

On the other side is a spherical handle which people can hold, to evenly distribute the weight of the saucepan when using both hands.

According to Arthritis Care around 10 million people suffer from arthritis in the UK.

Emma said: “I can see that arthritis does not just affect a person with its painful symptoms, it affects their whole life. What many people would see as a simple task, can become difficult and sometimes impossible for those with the condition. This can destroy independence; the one thing elderly and retired people desire to keep.”

James Dale, principal lecturer in Product Design at Nottingham Trent University, said: “Emma has seen first-hand how difficult it can be for people with arthritis to carry out tasks such as cooking and she has used this experience to create a product that could improve people’s confidence and independence.

“The saucepan has the potential to go beyond the elderly market and reach others who have the same condition.”