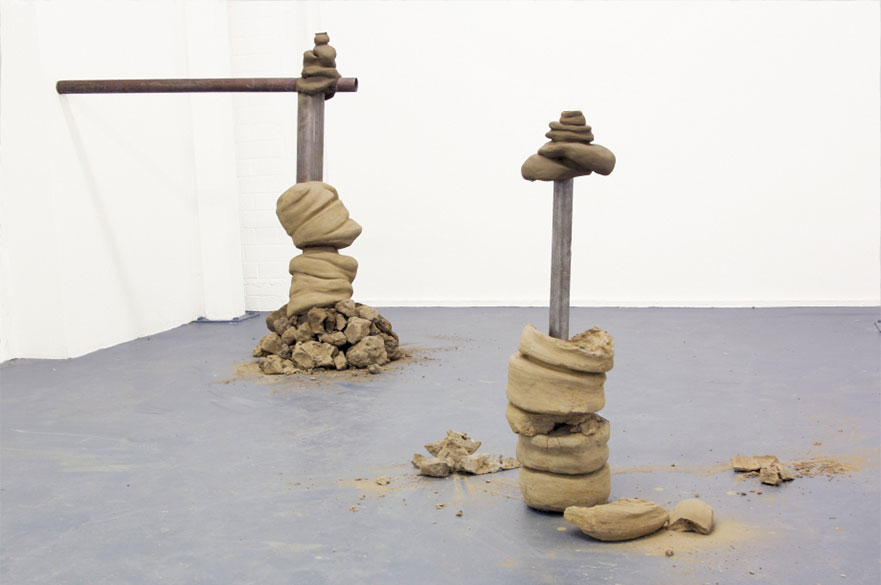 One of only two open exhibitions in the UK, participants are selected by a panel comprised of influential industry professionals, including curators, writers and artists. Showcasing final year students, graduates, and artists one year out of study, the annual national touring exhibition shines a spotlight on the UK's hottest contemporary art practice talents of the year.

The work Carla will be showing is called Natural Scaffolding, which has been selected out of hundreds of submissions from across the UK. The sculpture combines natural and industrial materials as a way of representing humans' volatile relationship with the natural world. It uses two 'contrasting' materials, both exacted from the ground, in an attempt to challenge the viewer's perception of the term ‘natural’.

On being selected, Carla said: “I felt shocked, but really excited and honoured to be selected to be part of such a great exhibition - one that I look forward to going to seeing every year.” On her practice, Carla said: “The precarious balancing within the sculptures is my way of representing the natural balance within nature which can be perceived as fragile, yet is incredibly intricately structured and adaptable. I am also playing with the question: what is supporting what?”

She continued: “I used scaffolding in particular as it is easily recognised as a temporary support mechanism within the architecture of cities, for change and adaptation, and it is robust yet easily adjusted.”

When asked what opportunities she hoped would come from her involvement in the show, Carla said: “I am hoping the exhibition will provide exposure, as I will be affiliated with a great name, which could lead to opportunities. I am also looking forward to meeting a whole network of people through this; everyone involved, and people who visit the show.”

Sean Cummins, Course Leader for Fine Art, said: "Carla's work is rooted in the earth and its materiality. She literally unearths clay and then forms it into unruly cylindrical bodies that float and fall in front of the audience."

On her achievements, he continued: "Whilst studying in her final year, Carla's work was exhibited at Surface Gallery in Nottingham, and she has also been selected to participate in an international graduate exhibition at KunstpodiumT in Holland next year. I look forward with eager anticipation to seeing her work displayed in the Bloomberg New Contemporaries."

Emily Strange, Lecturer and Fine Art final year course leader, commented: "There is a genuine engagement and rigour to Carla’s practice and throughout her final year she really took ownership of it. I’m delighted but not at all surprised that she has been given this opportunity, which I think will be the first of many."

With Bloomberg's support of New Contemporaries now in its eighteenth year, the national touring exhibition will launch for the first time at BALTIC Centre for Contemporary Art, Gateshead and BALTIC’s project space at BALTIC 39, Newcastle upon Tyne. It will open to the public from 29 September until 26 November 2017. The exhibition will then tour to Block 336 in London from 27 January until 3 March 2018.

Read more about Carla and Bloomberg New Contemporaries on the website.