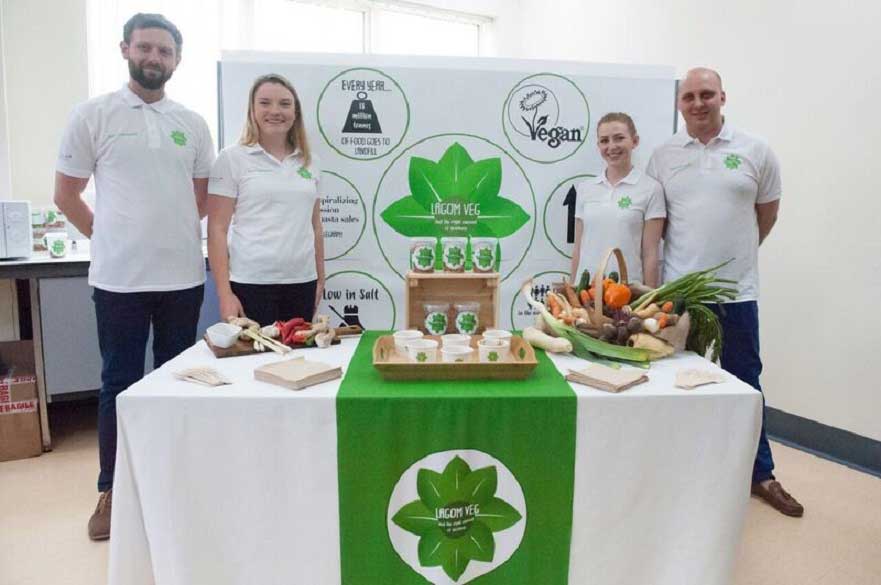 Team 'Lagom Veg' with their product

A team of food science and technology students have won a prize in a national food competition for creating a snack using vegetables, which supermarkets would normally reject due to their non-uniform shape.

The team at Nottingham Trent University were awarded £1,000 for creating ‘Lagom Veg’ – a vegetable snack made from dried spiralized vegetables infused with chilli and lemongrass. The ingredients are hot air dried and compacted into nests. The snack is prepared by adding water to the veg and microwaving it for two minutes.

The vegetables used in the snack are strangely shaped veg that supermarkets would usually reject.

The competition was part of the Ecotrophelia Food Innovation Student awards, which sees teams of UK students tasked with developing an innovative, eco-friendly food and drink product.

From idea generation through to the final packaged product, the teams get a hands-on experience of what it takes to bring an eco-friendly food or drink product to market.

As part of the competition each team pitched their ideas to a panel of 11 industry experts or ‘dragons’, who tasted the products and considered each entry for its industrial feasibility, taste, eco-innovation, originality, creativity and innovation, and market credibility.

The judges were representatives from companies including Marks and Spencer, Coca-Cola, Unilever, PepsiCo, Mondelez, Sainsbury’s, Tesco, Warburtons and Food Manufacture.

The Lagom Veg team, who are food industry apprentices and study on the BSc Food Science and Technology course based in the School of Animal, Rural and Environmental Sciences at Nottingham Trent University, were awarded a silver prize by the judges.

The result follows last year’s success when the  ‘Fran Borjan’ team at Nottingham Trent University scooped gold prize in the UK finals of Ecotrophelia, with their vegan low-fat iced dessert made with algal protein.

Bertrand Emond, head of membership and training at Campden BRI, said: "Ecotrophelia has gone from strength to strength. Over 250 students from 12 different universities have entered since we brought the competition to the UK five years ago. We are delighted that Ecotophelia has captured the imagination of industry and we are very grateful for the continued support that competition receives from the industry sponsors.

“Ecotrophelia showcases some of the brightest and best emerging food scientists and technologists in the UK. Innovation and creativity is essential for the continued success of the food industry so we hope that all the students will consider a career in the food industry when they finish their studies.”

The UK heat of the Europe-wide competition was organised by UK food and drink research organisation, Campden BRI, in conjunction with the Institute of Food Science & Technology (IFST), the independent qualifying body for food professionals in Europe.