MA Textile Design Innovation student Nick Thomas has developed a tactile textiles activity book which aims to give people the bug for creativity. 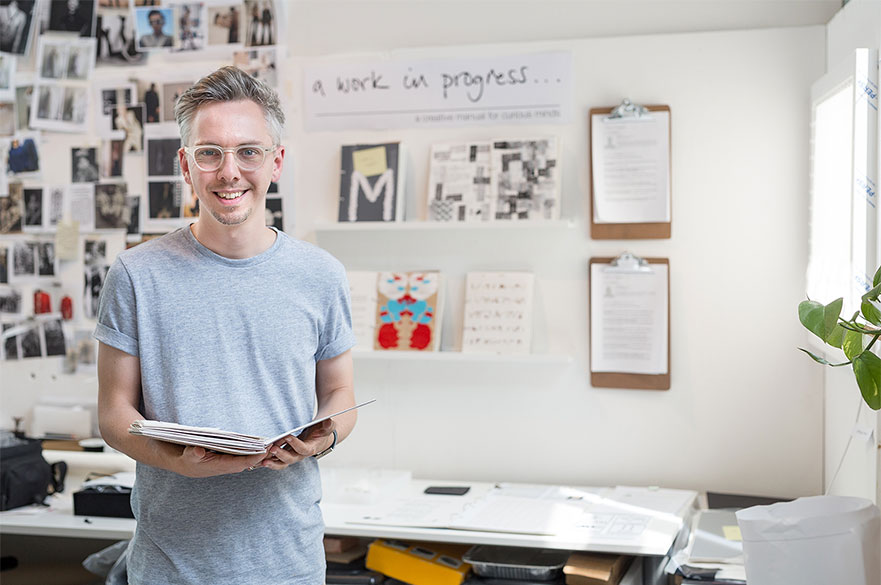 Former fashion designer Nick Thomas has developed a tactile textiles activity book which aims to give people the bug for creativity.

The 31-year-old - who’s studying MA Textile Design Innovation at Nottingham Trent University - worked with visually impaired people to help ensure it was as inclusive as possible.

The book allows people regardless of their skill, experience or ability, to instantly take part in creative projects and textiles work. It features a series of instructions and relevant materials for people to experiment with weaving, sewing, and sculpture using modelling clay and mod-roc.

Nick – who worked as a fashion designer for a number of household brands during his ten year career in the industry – worked with charity MySight Notts to help influence his design ideas.

Nick, originally from Bristol, said: “Usually art and design is exclusively for sighted people. And during the journey of me creating this book, I’ve realised that when you are sighted, the world works for you. But when you don’t have sight you’re restricted and can’t access the same information.

“My research has highlighted that new designers should be acknowledging that, and more so, trying to do something about it, for instance, by having braille on clothing tags.

“My grandmother had dementia, and after we lost her, I wanted to do something which would make a difference. I wanted to become part of a solution, not part of the problem.

Nick’s activity book, named A Work In Progress… is set to go on public exhibition for Nottingham Trent University’s postgraduate art and design exhibition Mastered, from 19 – 27 July at the university’s City Campus.

Principal lecturer Sean Prince, of the School of Art & Design, said: “Nick joined NTU on the MA Textile Design Innovation course as an opportunity to experiment with and explore the breadth of textile related techniques and processes that could offer him alternatives to his experiences in the fashion industry.

“From the very beginning he had a strong interest in community and sharing, which led to a strong commitment to voluntary work which in turn not only influenced but became the key focus of his project.

“It has been a great pleasure to see how this unique project has developed, resulting in a highly creative and innovative outcome that is truly inclusive.

“Nick’s project clearly exemplifies the message that we all can be, and are, creative. It is no surprise that Nick has already gained permanent employment as a university lecturer where his extensive knowledge, skills and creativity will nurture the development of future creatives.”