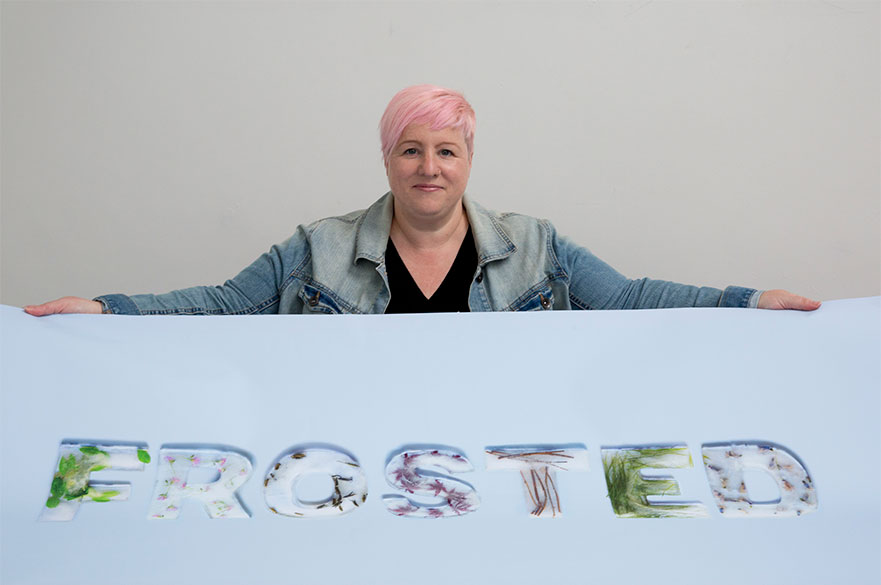 A Masters student who, like many people, says she gets the winter blues has developed a publicity campaign to help others overcome subsyndromal seasonal affective disorder.

Cathy’s idea centres on the establishment of winter park experience with a month-long series of activities including picnics around a fire, activities to get outside in the daytime and a ground-to-grill kitchen garden experience in which seasonable produce is picked and cooked with a chef.

As part of the marketing and communication strategy, Cathy has designed large-sized letters from ice to spell the word ‘Frosted’ for display around various places in a city to stimulate public and press interest.

These letters would stand separately on brushed steel drip trays and be displayed in different locations to allow people to piece the word Frosted together. A plinth beneath each letter would provide details of the campaign website – what-the-f.co.uk - where interested people can find out more information.

Cathy, a mature student from Sherwood in Nottingham, said: “Figures show that up to 25 per cent of the UK population experience the winter blues and up to 9.6 million working days are lost every year because of it. The condition manifests itself in quite a few ways, such as increased lethargy, a desire to eat more carbohydrates and greater susceptibility to illness."

"In January and February a lot of people can be hard-up financially and don’t feel like going out and enjoying themselves. Winter lasts for a quarter of the year, and if people aren't feeling themselves there’s a real cost to society. I’ve seen it with friends and family and was keen to explore what could be done about it as part of my Masters.”

Cathy – who recently won a silver award for her graphic design work as part of a Nottingham Trent University arts competition - says she will explore the potential of pitching the campaign to public sector organisations such as Public Health England or a local council.

Dr Sarah McConnell, curriculum lead on MA Visual Communications at Nottingham Trent University, said: “Cathy’s project could make a real difference to the many people who struggle during the winter months.

“This is a real-world project that shows an innovative approach. It uses graphic design to improve people’s lives and this is something that we endeavour to inspire on the Masters programme.”