Understanding how endangered whales react and respond to large vessels is the aim of new research getting underway at Nottingham Trent University. 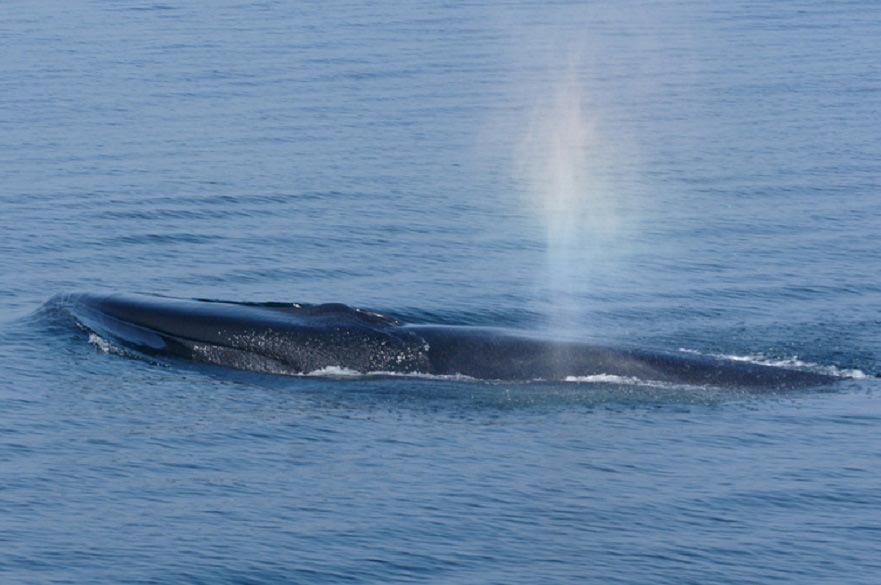 It is hoped the findings could be used to try to reduce the number of North-East Atlantic fin whale deaths – up to 30% of which are caused by collisions with ships.

Fin whales are the world’s second largest animal behind the blue whale, reaching an average length of more than 60ft.

Postgraduate student Ruth Coxon is collaborating with UK-based whale and dolphin conservation charity ORCA and Brittany Ferries as part of the project.

ORCA is one of the UK's leading marine conservation charity and conduct citizen science in partnership with shipping companies in UK & European waters, including frequent research surveys in the Bay of Biscay.

Ruth will spend most of July and August on board Brittany Ferries flagship cruise ferry the Pont-Aven, recording real-time observations of fin whales from the ship’s bridge.

The work will focus on Portsmouth and Plymouth routes to Santander in Spain, particularly the deep waters of the Bay of Biscay where fin whales can be found in abundance. It is one of the world’s busiest shipping lanes.

Ruth – who studies biodiversity conservation – will also use high definition cameras to provide a more detailed analyses of close encounters.

Research to understand their awareness of ships – as well as their avoidance behaviours – is seen as critical in being able to implement new measures to mitigate ‘ship strikes’ by whales.

By recording the precise distance and positioning of the whales from the ship, Ruth hopes to be able to determine whether they are responding to visual or sound cues.

The project will also involve monitoring the whales’ respiration rates, and other behaviour, to highlight stress responses as a result of approaching vessels.

“Being one of the world’s busiest shipping lanes, fin whales are at increased risk of being struck here,” said Ruth, who studies biodiversity conservation in the university’s School of Animal, Rural and Environmental Sciences.

She said: “Collisions with the endangered fin whales are thought to be largely unreported. Our work has potential to provide invaluable insight into their behaviour and how we might reduce the number of collisions with vessels.

“Utilising ORCA’s unique partnership with Brittany Ferries, we hope to pave the way for future research, while helping to determine appropriate avoidance measures for shipping companies.

“Fin whales’ adult size starts from 60ft, but they can grow up to 88ft in some parts of the world. Another interesting fact is that they have asymmetrical colouration of their lower jaw – the right side being white and the left side being grey - thought to function as a camouflage strategy for feeding depending on their angle of approach.”

Dr Nicholas Ray, Senior Lecturer in Environmental Science, at Nottingham Trent University, said: “The problem of whale strikes has existed for centuries in this location, which is one of the most revered shipping routes in Europe. With the upsurge of cetacean strikes in the last decade this research could further our understanding of the behaviour of whales and help provide crucial preventative measures for the future.

“This work also complements aquatic research already being carried out at NTU. The School of Animal, Rural and Environmental Sciences has researchers working in the areas of fish biology, marine ecology, freshwater pollution and flood management.”

ORCA Director Sally Hamilton said: “Whales being hit by ships is a global problem and is one of the main threats facing our large whales today.  It is hoped that this pioneering and innovative pilot project developed through ORCA observations on board Brittany Ferries over the last decade will help to create a long lasting solution to mitigate global ship strikes.”