Permission has been granted for Nottingham Trent University to convert a former chapel into a university hall for graduation ceremonies and performances. 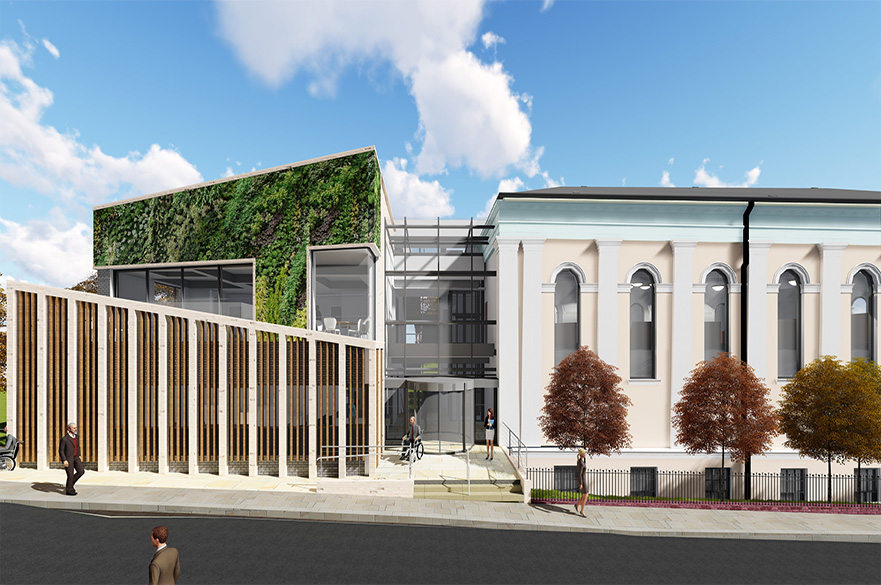 The former Wesleyan Chapel in Shakespeare Street was bought by the University earlier this year with the view to converting it into use as University Hall, preserving the listed building and securing its future.

The original building, most recently used as a synagogue, was constructed in 1854 to designs by Thomas Stimpson but a large rear extension was added in 1976.

Local architecture and construction consultancy YMD Boon has worked on the plans to replace this modern extension with a striking new space to be used as a music centre and dining area. The plans also include the renovation of the original chapel as a venue for graduations and other ceremonies or performances. The plans recently received approval from Nottingham City Council.

Matthew Hills, senior architect and heritage expert at YMD Boon, said: “We are proud to be working on this scheme which will restore this important building and transform it into a high-end facility that students and staff at Nottingham Trent University can be proud of, merging both old and new elements of the building together.”

A new stained glass window is planned for the front of the building, depicting the University’s crest.

Steve Denton, Chief Operating Officer at Nottingham Trent University, said: “We are pleased the plans have been approved and that work can commence on transforming and preserving this fantastic building. NTU is the ideal guardian for this building and will ensure its long term care. We have proved our sensitive and award winning approach to restoring important buildings with the transformation of 50 Shakespeare Street and our iconic Arkwright Building.”

David Yates, Director at YMD Boon, added: “Nottingham Trent University is an important contributor to the city scape. The retention of a landmark building and conversion into a sustainable asset is part of the University’s mission. The venue will enhance music facilities and performance opportunities for the student population but critically, the stunning venue will revolutionise the launch of huge numbers of students into the next phases of their careers.

“This is a challenging project which is set to achieve the sympathetic restoration of the chapel and introduce state of the art modern facilities that will be used and enjoyed for generations to come. We’re delighted to be working with the University and Gleeds on this scheme and look forward to seeing the two-phase development take shape over the coming months.”