A graduate from Nottingham Trent University used previously unseen plans to bring the Nottingham Victoria railway station back to life in 3D fifty years on from its closure. 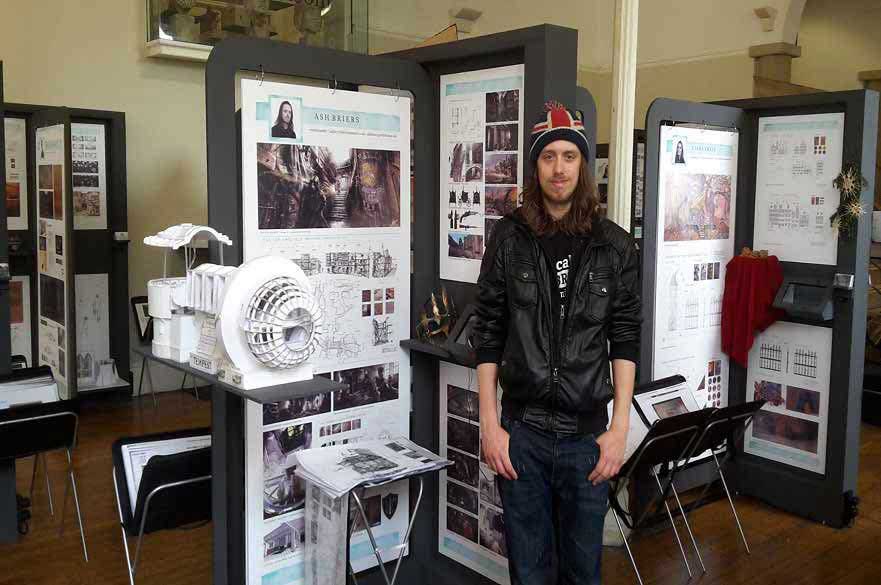 The station was closed in 1967 to make way for the Victoria Centre and undergraduate Ashley Briers, who studied Design for Film and Television at the School of Art & Design, has created a 3D model using original building plans and photos.

Ashley, 23, from Orton Longueville, Peterborough, began the project in his final year at university and wants to eventually create a video game, which would allow the player to explore the historic station once more.

The station was recreated using a 3D modelling software called SketchUp and after sharing his work online, Ashely discovered Nottingham designer Richard Gregg who was working on his own 3D model.

The pair teamed up and have been working on creating detailed models for the past year using more advanced software called 3Ds Max.

Ashley said: “The railway station is still in people’s minds and many have fond memories and touching stories to tell us, so we are trying to take them back to the place those memories were made.

“Our ultimate goal is to take everyone back to see a piece of Nottingham’s history how it was over half a century ago.

“I had become enthralled in Nottingham’s history from my first year at Nottingham Trent, when we had to design a film set based on somewhere in Nottingham, and in that time I developed great appreciation for the city and its heritage.”

Ashley currently lives in Canada where he continues to work on the project.

For the 50th anniversary of the railway’s closure, Ashley and Richard posted a 360° panoramic 3D model on their Facebook page which has been shared over five hundred times.

Ashley was selected as best student production designer of the year at Nottingham Trent by Donal Woods, Production Designer of Downton Abbey and My Week With Marilyn, amongst many others.

Jayne Harvey, course leader of BA (Hons) Design for Film and Television said: “Ashley is very talented; we are very happy that his university work has inspired his interest in this local history project, to the benefit of the local community and beyond.

“This is a great example of how the many skills developed whilst studying Design for Film and Television, here at Nottingham Trent, can be applied in a variety of contexts.”

Richard Gregg, a Nottingham designer who is working on the project with Ashley, said: “Our partnership on this project came about out of a mutual interest in recreating Nottingham Victoria Station in all its glory.

“Ash is an incredibly talented unstoppable force, from meticulous research to building the models in 3D.

“When we are working out the buildings, we will bounce ideas off each other as he has a great architectural mind and is often able to help me fill in the blanks.”