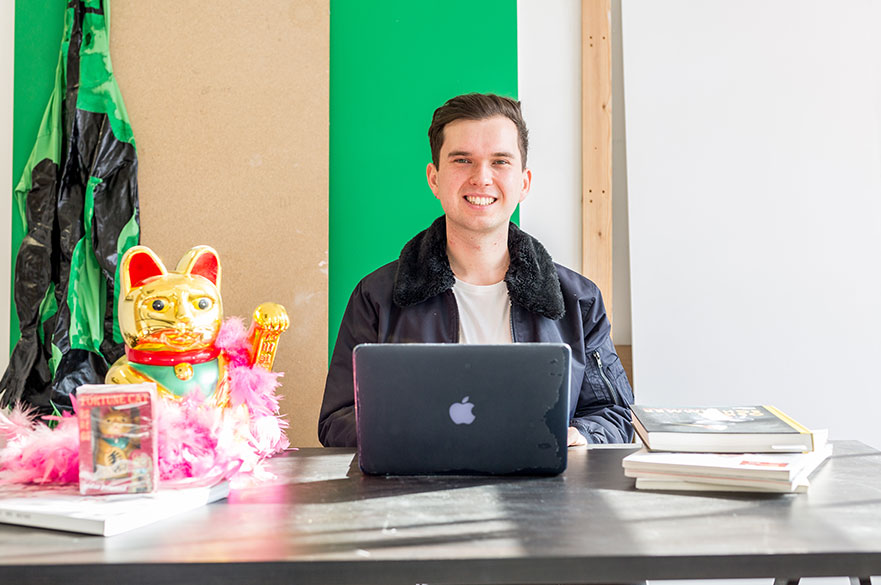 Jake Moore in his Backlit studio

A graduate from the BA (Hons) Fine Art course at Nottingham Trent University has been awarded a solo exhibition at The Collection in Lincoln, after participating in a group show earlier in 2017.

Jake Moore, who graduated in 2015, was selected to exhibit in OPEM 4, the 4th biennial open exhibition showcasing local artists at the art gallery in Lincoln’s historic centre, back in January. After impressing curator Elinor Morgan and artist Brian Griffiths, Jake was subsequently named winner of the ‘Solo Exhibition Prize’, which saw him receive the funding and supplies to create new work, including Dreams in Ultraviolet, which was commissioned especially for the exhibition.

In his resultant solo exhibition entitled Future Body, Jake presents five large-scale audio-visual installations that explore the boundaries between the body and the digital world. His practice explores the human relationship with screens, and interrogates the line between the body and digital code.

Employing computer animation, video and sound, he considers the inadequacy of the human form in the face of our increasingly ubiquitous technological climate. Consuming and consumed by an information stream, he is concerned with the immersive relationship that we have with the artificial meditative glow of digital screens. After graduating in 2015, Jake has continued to work and reside in Nottingham. He is the studio manager at BACKLIT, an independent art gallery and studios in Nottingham, as well working as an artist on his own practice. On the experience of being selected for a solo exhibition in Lincoln, Jake said: "It was incredible to have the opportunity to exhibit a body of work from the last two years within a sole environment. The gallery were hugely supportive, allowing me to be ambitious with the scale of the installations. This is a moment I will reflect on for years to come."

Thinking about his time studying at NTU, Jake said: “I’ll never forget the first time I visited the Fine Art studios. Their expansiveness and levels of natural light meant that I could be really ambitious with my work from Year One.”

He continued: “The course taught me to be proactive in creating my own opportunities following graduation. The friends that I made on the course became the most important contacts, and a critical dialogue and an opportunity for collaboration has continued with many of my peers two years on.”

He praised the course, saying: “The most valuable thing that I learnt was the importance of taking risks and accepting failure as an important and constructive part of the creative process.”

Jake’s upcoming exhibitions include Frequency Festival of Digital Culture in Lincoln, Life 2.0 at the isthisit? pavilion at The Wrong Biennial, and Notes on Queerness at The Royal Standard in Liverpool. Future Body can be seen at The Collection in Lincoln until Sunday 22 October 2017.