Two second half goals gave Nottingham Trent University a hard earned 2-1 win over a University of Birmingham XI whose endeavours ensured the match wasn’t an easy one for the home side. 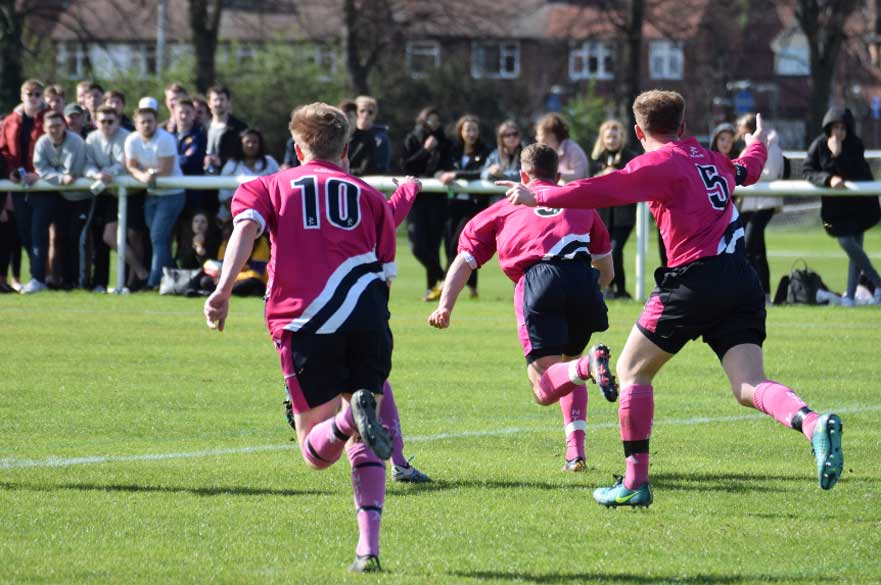 Perhaps aware of the offensive talent in the NTU ranks, they opted for a 4-2-3-1 formation that was capable of morphing into a 4-5-1 system when on the back foot. Credit must go to the UoB players and coaching staff who, in a tough away fixture, gave a good account of themselves while showcasing their organised defence.

After a 5-0 away victory at University of Stirling last time out, you would have thought NTU would have come out firing, especially being the home team. However, it was the away side who started the brighter of the two.

Within just five minutes of the game came the first shot on target – the UoB lead striker firing just wide when put through on goal.

If that was a warning shot for the NTU defence, then came the wake-up call. Because five minutes later, the away side took a well-deserved lead. It was their striker causing all the problems again, latching onto a delightful through ball from the midfield to finish neatly passed the advancing home keeper.

NTU, now behind, were beginning to gain more levels of possession in the game, and could have taken the lead before half time. Some good football from Aidan Austin down their right-hand side resulted in a low pass across the box to Jake Wright. Only six yards from goal, he placed his shot at goal, which was brilliantly blocked by the UoB defender.

Another chance swiftly followed for a newly reinvigorated NTU, as Austin curled just wide of the far post from a promising position on the edge of the box.

Just before half time, UoB hit the home side on the counter attack once again, but to spare NTU’s blushes, the away forward put the ball into the side-netting in the 43rd minute.

The second half was a rather tense affair as both teams realised that conceding the second goal could be a terminal blow. For UoB, this half was all about preserving their precious 1-0 lead, while for NTU, it was all about finding a way back into the game.

And that they nearly did when with 52 minutes on the clock, Jonny Coates had an effort on goal well saved by the away keeper. The home side kept up their patient possession game and had a few more half chances to no avail.

And then came the breakthrough. NTU’s No.9 Jack Duffy, who had worked hard all game with no rewards, was the one who got it, calmly finishing from a hashed clearance by the UoB defender from a home corner.

Trent were now fully on the front foot, and UoB reverted to a 4-5-1 formation to try and nullify their attacking threat. On 67 minutes, NTU had yet another chance, with Samson Alalade working the away keeper, who made a fantastic save low down to his left.

Just as it looked like this game might be heading for a draw, in the 72nd minute NTU finally took the lead that their play deserved. It was that man Duffy who got the goal again, with a brilliant burst and unselfish play by Jonny Coates in midfield resulting in an easy tap-in for the home striker.

With that, the game changed pattern again during the final 15 minutes, with UoB now pressing for the equaliser. They couldn’t create anything of note until the 82nd minute when their right winger ventured into the box but saw his shot blocked on the line by the home defender.

So, in the end it was NTU who hung on for the win, adding to their victory at Stirling last week. This 2-1 win also saw them go joint top of the BUCS Football 2017-18 Premier North league table with Northumbria on 7 points.

While UoB may take credit in their performance, their loss sees them below NTU in the league tables.