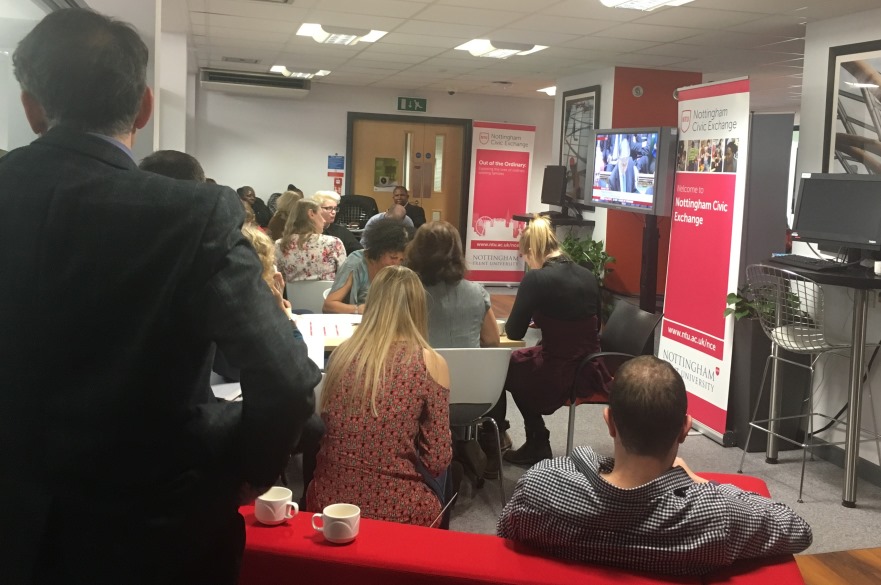 Nottingham Civic Exchange brought together students, residents, community groups  and academic experts to watch the Budget live, debate what it meant for the region and share this with a range of media during and after the event.

Dr Paula Black, Director of Nottingham Civic Exchange, said "the event had proved hugely successful in focusing attention on what the budget decisions made nationally actually meant for Ordinary Working Families in Nottingham."

“The feeling in the room from both residents and academics was that the Chancellor made some welcome announcements but there was little in the budget of benefit to the general Nottinghamshire public and the region as a whole,” said Dr Black. “While there were announcements on pots of cash for infrastructure, half of this cash was promised to areas with Metropolitan Mayors which we don’t have. While there were announcements on research and development funding, there was a focus on high tech areas while sectors in which the majority of Ordinary Working Families are employed, such as retail and the service sector, were not mentioned.  Our participants worried that Nottingham and the East Midlands was at risk of being left behind when it came to new and important projects and funding because of the focus on areas such as Manchester, the West Midlands and Liverpool.

“There was a lot of positive talk around ambitious housing targets but the residents at our event felt that owning their own home would still be unachievable due to high rental prices making it impossible to save deposits.”

The removal of Stamp Duty Land Tax will support a few but it does little to impact on the broader issues affecting the growing numbers living in the private rented sector.  Whilst house prices in the region are lower than the national average this is offset by the depressed average earnings figures for the region, city and county.

Students who attended the event were also left disappointed by a lack of announcements benefiting them, despite the budget having been expected to appeal to the younger voter. Nottingham Trent students were pleased fresh announcements were made about supplying affordable homes for them when they graduated but also worried that little was said to support the Green Economy. 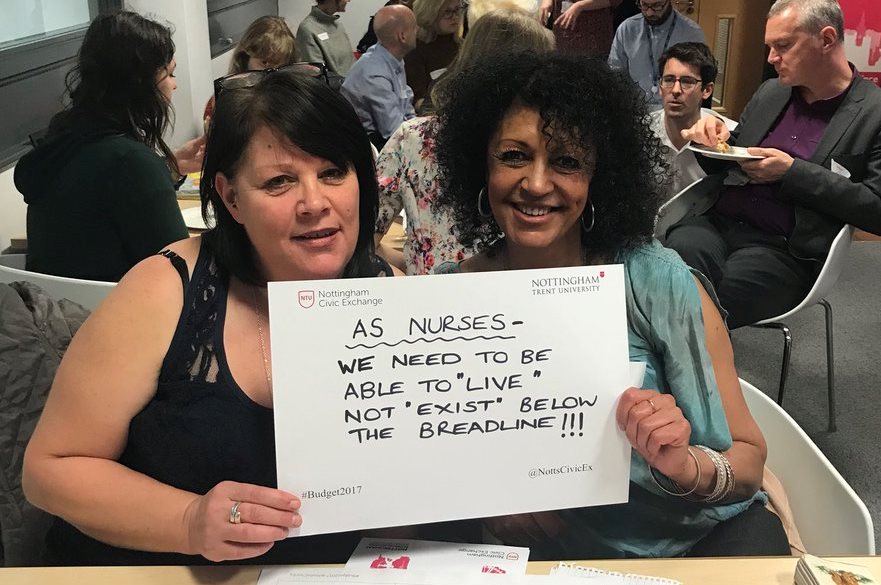 One issue that brought the room together was the concern for mental health provision. Students, residents and academics were all concerned with the lack of profile given to this service during the Budget announcement.

A key sector Nottingham Civic Exchange highlighted for support in its research on Ordinary Working Families and Inclusive Growth - Social Care - failed to gather any airtime.  As one student and mum highlighted at the event: “No mention of social care, no investing in those kind of jobs, nothing to address the needs of women or childcare.”

The views of all those who attended are now being collated to build on initial analysis of Ordinary Working Families Nottingham Civic Exchange has carried out and released at its launch in June.

Nottingham Civic Exchange has been established by Nottingham Trent University to maximise research, policy and practical impact by bringing together university expertise with partners seeking to address the needs of local communities. NCE acts as a resource to look at social and economic issues in new ways. This means facilitating debate, acting as a bridge between research and policy debates, and developing practical projects at a local, city and regional level.