A graduate from Nottingham Trent University with coeliac disease has blended berries, seeds and greens to create health supplements for her new business. Charlotte Bailey and Sean Ali
Founders of Super U

Charlotte Bailey has launched Super U with her partner Sean Ali, which sells three supplements designed to improve the immune system and get people eating in a healthier way.

Coeliac disease is a digestive condition where the small intestine becomes inflamed and unable to absorb nutrients.

Charlotte, 21, from Nuneaton in Warwickshire, struggled with regular illness as a result of the disease whilst studying for her law degree at Nottingham Trent and is unable to eat any food containing gluten, a protein found in wheat, barley and rye.

Sean, 25, from Newcastle, played an instrumental role in improving Charlotte’s diet by steering her away from processed gluten-free meals and introducing her to easy and healthy alternatives made from scratch.

Now the pair want to use their experience to help others.

“Coeliac disease means my immune system isn’t the best and I was constantly falling ill at university which was difficult to deal with,” Charlotte said.

“Sean spent time studying in America as part of his business degree and noticed how popular superfoods were becoming because of their health benefits. We wanted to create a brand that can help make people like me feel happy and healthy again.”

The supplements, a berry blend, a greens blend and a plant based vegan protein are gluten free and organic and are designed to be incorporated into a balanced diet.

The foods in the three supplements are referred to as superfoods because of their rich nutritional value delivered in a concentrated dose. 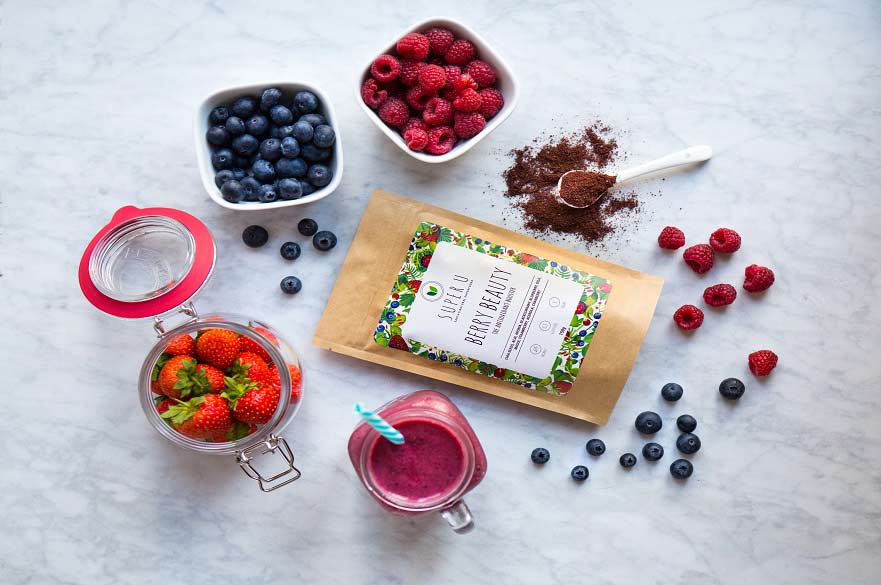 Charlotte and Sean used help from The Hive – Nottingham Trent University’s centre for entrepreneurship and enterprise – to develop the Super U brand and received support from the Enabling Innovation programme to create a formula for their berry blend, funded by the European Regional Development Fund.

The blend features ten types of berry which contain antioxidants that help protect cells in the body.

“For an assessment within my entrepreneurship module whilst studying in America, I developed a business plan focusing on healthy fast food and superfood smoothies,” Sean said.

“It wasn’t until I returned home that I realised superfoods could really help many of Charlottes existing health problems and in fact benefit me as well.

“The plant based protein is made from organic brown rice, pea protein and pumpkin seeds so it is a perfect alternative protein supplement for vegans and it contains all of the essential amino acids.”

The entrepreneurs have sourced and recycled unwanted coconut shells and coconut palm wood, to create completely natural, eco-friendly and reusable coconut bowls and spoons available to buy with the supplements.

Phil Clarke, Enterprise Adviser at The Hive, Nottingham Trent University, said: “Sean and Charlotte have really driven their idea from day one. They have made it happen rather than waited for it to happen and that is what being entrepreneurial is all about. I am really proud of how they embraced the whole process and swiftly made such positive progress.”