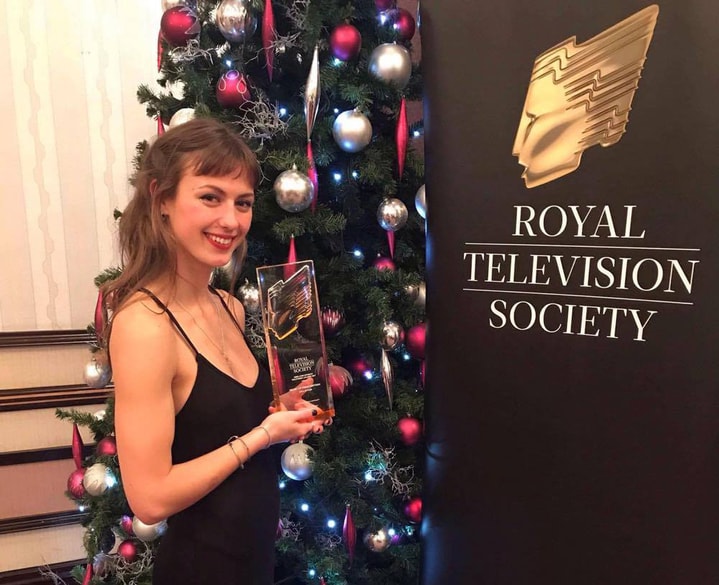 Anna Butler, 2017 graduate of BA (Hons) Broadcast Journalism, won a prestigious Royal Television Society student award in the RTS Midlands awards ceremony this November. The evening looked to celebrate excellence in television in the Midlands, bringing together industry professionals and launching the careers of upcoming talent. She has since gone on to win the national RTS Undergraduate News Award for the same feature.

The award, for Best News Item, was presented to Anna in a ceremony at the National Motorcycle Museum in Solihull. Her news package, ‘Music on Prescription,’ looks at the role music is playing in helping NHS patients overcome illness and injury, including strokes. By looking at a case study of a young man with autism, we hear how every attempt to deal with his condition failed: before meeting with a music therapist. Anna was supervised by course leader Gail Mellors from the Centre for Broadcasting & Journalism, and also by Notts TV, who operate in partnership with Nottingham Trent University, where she completed a placement as part of the third year of the course.

Winning the award so soon after graduating this summer has given Anna the determination to progress her career further. She told us: “It has given me a huge confidence boost. I didn’t actually submit my film, one of my lecturers did, so to win is a huge surprise. It’s made me more determined to believe in myself.”

Also nominated on the evening was Ruth Avison, who graduated in the same class as Anna. Ruth’s short documentary, ‘Living the Ugly Lie’ focused on severe body dysmorphic disorder and the effects social media has on people suffering with the illness. It was fantastic to see talent from Nottingham Trent University nominated, a true testament to the professionalism of the courses at CBJ.