A cold night down at Lady Bay saw NTU face second in the league Cardiff Met who have proved to be a tough side to beat all season. After a close first 40, Cardiff took the game away from NTU in the second half as they found holes in the defence and dominated at the scrum. 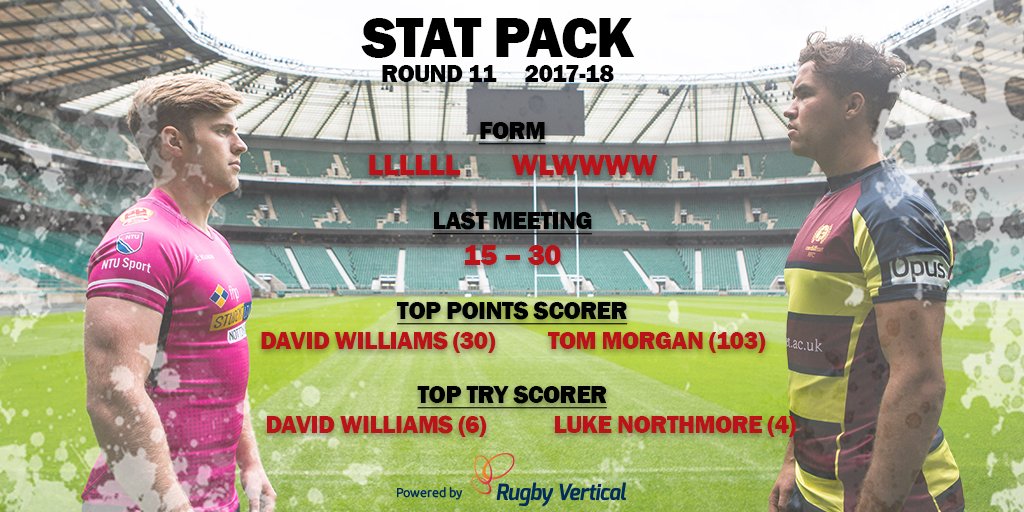 Cardiff were the first to find their feet in the game, putting pressure on from the off and not letting NTU get out their own half. Two penalties in front of the sticks gave the away side an easy 6-0 lead with 13 minutes gone. NTU however, were the first to put the ball over the line as Alex Goble found a gap in the defence, passed the ball wide to Rob Waldron who then offloaded back inside for Harry Graham to get his second try of the season: NTU 7 – 6 Cardiff. The slender lead didn’t last long for NTU, when an intercepted pass by Cardiff in their own 22, allowed them to spring the ball wide and run the length of the pitch to score in the 17th minute: NTU 7 – 11 Cardiff. NTU didn’t let this deter their efforts though. Harry Graham again causing problems with a quick tap and go that the Cardiff defence weren’t ready for. No one to stop him running through meant he was under the posts for his second try: NTU 14 – 11 Cardiff. NTU would have been disappointed with how they conceded Cardiff’s second try. An easy break for the Cardiff 6 saw him power through the line on half-way and fend off a number of players to then offload the ball inside to put Cardiff back ahead: NTU 14 – 18 Cardiff. The momentum looked to be swinging towards the away side, as they looked for another try before half-time. After a number of phases they eventually found a hole that allowed Cardiff to end the half with a score: NTU 14 – 25 Cardiff.

NTU would have been content with the score going in at the break without that final try. However, with Cardiff having the final say, the NTU heads would have dropped a little after showing promise in the opening 25.

It was a scrappy start to the second half by both sides, as they exchanged possession from silly mistakes for 10 minutes. The first try of this half was going to be crucial for both sides and it was Cardiff that extended their lead through a short chip over the top that was collected and placed down: NTU 14 – 30 Cardiff. The game was slowly slipping away from NTU as the clock ticked, and they struggled to break into the Cardiff 22. Nothing was really going NTU’s way in the final third and it just didn’t look like it was going to be their day despite having long periods of possession. Cardiff responded back with some sustained pressure of their own from their forwards. A scrum 5m out for Cardiff, which they had dominated all game, allowed them to pop the ball out the back for another try: NTU 14 – 37 Cardiff. A final surge in the last 5 minutes for NTU couldn’t quite give them the try they had been in search for all half and the game ended NTU 14 – 37 NTU.

It certainly wasn’t NTU’s worst performance nor was it their best. Unlike when the sides met earlier in the season, they had a lot more of the ball in hand, but they just failed to create many real opportunities in the second half. Gaps in the defensive line and ball retention may have just cost them the game, and NTU will know small errors ­in tight matches will be what makes the difference in this league. The boys go away for Christmas now having lost all of their opening 11 games. Hopefully the new year will bring them new luck, and a chance for the number of players out to recover and get back in the side.