Victory at long last for the men in pink

With two games left of the season, NTU found themselves up in Yorkshire facing Leeds Beckett, who have proved themselves to be no push over this year. A gritty performance from NTU, and a high tempo set throughout, was too much for Leeds to handle. NTU sailed to a deserved victory in the second-half to finally end their long awaited search for a win. 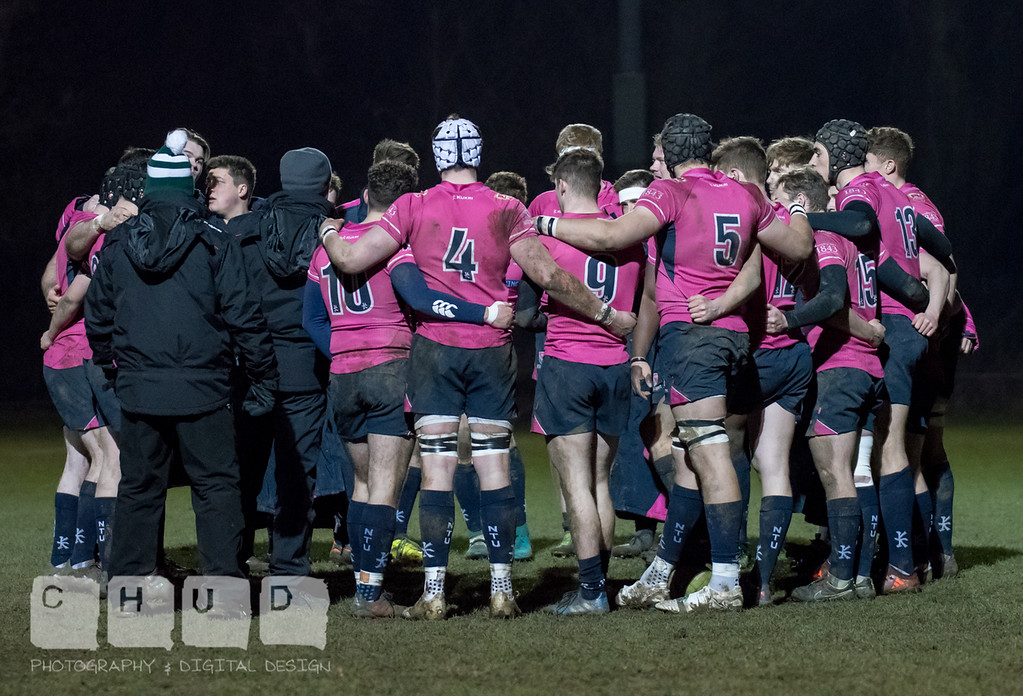 From the off, NTU put Leeds under pressure in their own 22 and forced an early yellow. This didn’t deter Leeds however, as they came straight back at NTU with a series of phases to drive the ball over for the first try: Leeds Beckett 7 – 0. If you’d have blinked, you would have missed the next try. Straight from the kick, Leeds fumbled the ball right into the hands of Cardall, who offloaded to Goble, and then to Graham who touched the ball down in the corner: Leeds Beckett 7 – 5 NTU.

Sustained pressure from NTU forced a few silly mistakes from Leeds, and a chance for NTU at the line-out 5m out. Leeds were unable to stop the driving maul, with Jack peeling off the back for an easy score: Leeds Beckett 7 – 12. NTU dominated possession for the next 10 minutes, varying the attack with flair which we’ve started to see more of in recent weeks. This unfortunately didn’t lead to any points, and when Leeds finally did get an opportunity in NTU’s half they took it. Similar to the first try, the forwards doing all the work with the ball to put them back ahead: Leeds Beckett 14 – 12 NTU.

Although the score was close, things just seemed to be going NTU’s way. The NTU forwards continued to gain yards with strong carries, which eventually allowed Farnworth to reach for the line off the ruck: Leeds Beckett 14 – 19 NTU. Leeds were back again however 5 minutes later. The scrum-half with a quick show and go to find a hole in the defence, turning the tide back into Leeds' favour: Leeds Beckett 21 – 19 NTU. NTU were the ones to have the final say in the half though. A superb cross-field kick from Sutton straight into the golden hands of Goble, for him to stroll over the line to take the lead going into half-time: Leeds Beckett 21 – 26 NTU.

A half in which tries from both sides were back and forth provided an exciting watch. NTU however appeared to be the ones controlling possession and playing the better rugby. Everything was working for NTU, and the boys would have known that if they could put in the same performance as they did in the first, then they would come away with the win.

The first try in the second-half was crucial, and it was NTU that made it theirs. Harry graham producing a bit of magic similar to his try against Hartpury, leaving the Leeds Beckett defence for dead down the wing after 5 minutes: Leeds Beckett 21 – 33 NTU. If NTU could keep their tempo up, then there would be no chance for Leeds to get back into the game. A penalty kick to the corner gave another line-out for NTU, and chance to extend the lead. The Leeds boys were left standing, when a blistering line from Williams sent him straight through the defence off Murray’s pass for another NTU try: Leeds Beckett 21 – 40 NTU.

There was still 30 minutes to go though, and plenty of time for Leeds to get back into this. A scrum 5m out for Leeds allowed them to put points on the board and bring them within 10 of NTU with roughly 25 minutes to go: Leeds Beckett 28 – 40 NTU. Having let leads slip before, NTU would have been desperate to hang in there and churn out the final quarter of the game. Miller added 3 from the boot, just outside the 22 to take the game further away from the home side. Once again, great play from Murray at 9 to steal the ball from the Leeds scrum, and then send down field to have Leeds on the back foot on their 5. A number of penalties then conceded by Leeds, led to NTU being awarded a penalty try from the scrum. With under 5 minutes left, the players knew the game was won and could taste victory: Leeds Beckett 28 – 50 NTU. Leeds finished the game with a try of their own, with a few pick and goes from their forwards, but this was merely a conciliation.

A great all-round performance from NTU that was deserved and had been coming for a number of weeks. A high intensity that was set early on and sustained, looked to be one of the key factors that helped get the win. This is something that was lacking at the start of the season, and has slowly begun to come through in the side over the last few games. In addition to this, it is evident that NTU are playing with a lot more confidence individually and as a team. Neil Fowkes and Alex O’Dowd will be hoping the boys can carry this momentum into next week’s game against Durham, and then into the cup.

Victory at long last for the men in pink