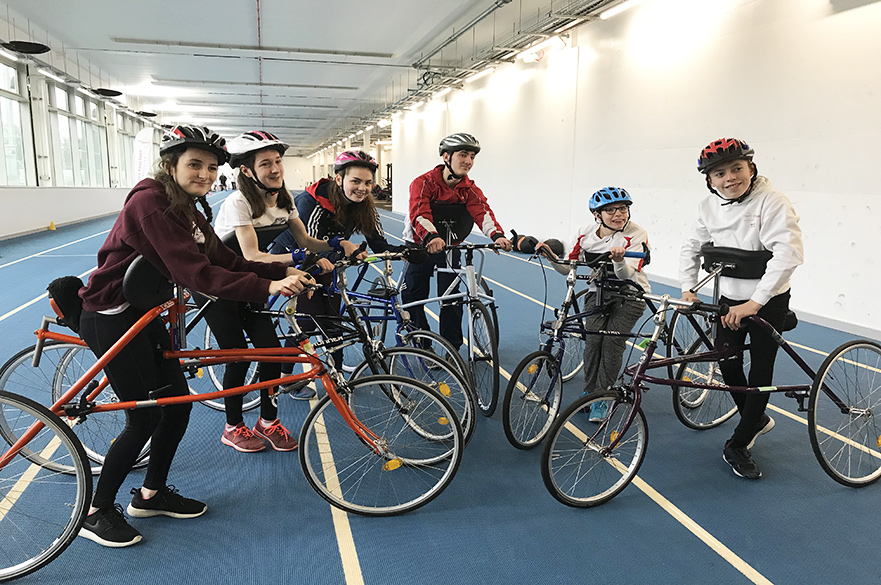 The film focuses on the charity’s sport of RaceRunning, for children and young adults who are unable to run and therefore rely on sports aids for mobility and balance. The students worked in collaboration with the company to develop both a promotional video and an educational film about RaceRunning in particular. The film contributed a key moment in the launch of their #CPCan 2018 campaign, designed to coincide with Cerebral Palsy Awareness Month.

RaceRunning involves a three-wheeled frame, supporting the athlete by a saddle and body plate. The person propels against the frame using their feet, and steers using the mobility within their hands and/or arms. This can be played as both a recreational activity, and a way to improve overall fitness and strength. Players can compete in the sport in various distances based on experience and fitness level.

As part of their ‘Advanced Media Practice’ module, the students set up their production company, TAD Productions, in order to liaise with the client in a more professional scenario. It made sense for the group of friends to formalise their collaborations, having worked on projects together in their first and second year of University. They filmed over two days, using three cameras between them, with two members of the team leading on editing.

Speaking on the launch of the film, Ali Talbot, Chief Executive of Cerebral Palsy Sport said: “We are very proud to be able to introduce our RaceRunning film as part of Cerebral Palsy Awareness Month and are very grateful to the Media students of TAD Productions from Nottingham Trent University who worked so hard to bring this film to fruition. It has been a unique partnership and one we seek to grow for the future with the University. Our biggest thanks goes to the all the RaceRunners and their families who gave up their time to help to make this film.”

Dan Stone, one of the members of TAD Productions, told us: "Working with cerebral palsy sport was a great experience. We had the opportunity to gain valuable real-world work experience, whilst working alongside a fantastic charity. We were given the chance to learn about RaceRunning as a sport, and it was great to have the privilege of filming some of the England squad in action."