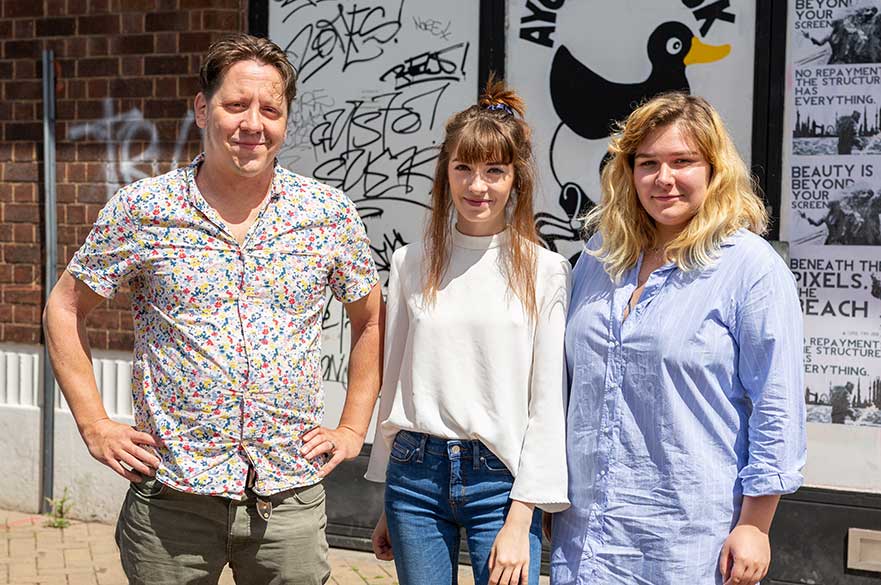 Two students on our BA (Hons) Fashion Communication and Promotion course completed a placement with Nottingham UNESCO City of Literature this June. Madalina Cotea and Bianca Mihai worked with the charitable organisation, based in Sneinton Market, on a number of projects during their two-week stint.

The placement was part of the Grads4Nottm scheme, a partnership programme established with the aim of encouraging more students to stay in Nottingham after they graduate. Students are placed with local companies for two weeks, with the hope that future employment opportunities will be created.

Whilst at Nottingham UNESCO City of Literature, Madalina and Bianca worked on a big project entitled “The Lost Words for Nottinghamshire”.  The aim of the project was to crowdfund £5,000 by Monday 16 July, in order to gift a copy of “The Lost Words” by local author Robert Macfarlane to every primary school in Nottinghamshire. The book, beautifully illustrated by Jackie Morris, brings to life the natural world and seeks to save certain words that are disappearing from children’s vocabulary, such as magpie, kingfisher and otter.

Madalina and Bianca created the poster for the campaign launch, set up an official Instagram channel for the campaign, and posted regularly by providing information on the Nottingham City of Literature official Instagram channel. In one week, they raised more than half the money needed. Robert Macfarlane and Jackie Morris personally congratulated and thanked them on their hard work. The Lost Words by Robert Macfarlane. Illustrated by Jackie Morris

We caught up with Madalina to talk about her placement experience. She told us: “I enjoyed being in a small community where everyone learns and supports each other. Apart from discovering new hidden places around Nottingham and meeting extraordinary people, I really appreciated the dedication shown by Matt Turpin, Communications and Projects Manager for Nottingham City of Literature.”

She continued: “In two weeks, I learnt new helpful tips on filming and editing, as well as developing my time management, flexibility, and multi-tasking skills. And thanks to the internship, I see potential in Nottingham’s small businesses. I really do see Nottingham in a different way now, and I would like to thank the whole team for that.”

Matt Turpin commented: “This is our second year of participating in NTU’s Grads4Nottm scheme, so we knew it would be good. We were not expecting how good, however! Bianca and Madalina were professional from the off, and managed to find their way around a complex commission with ease.”

He continued: “Their resulting design and social media work was more successful than we could have ever have anticipated. When one of the nation’s best writers and one of Britain’s greatest illustrators send over messages praising the work they did, you know that they have done something special. We have had a thoroughly enjoyable fortnight, and it was a great privilege to have two students with a great future ahead of them working with us for that time”.