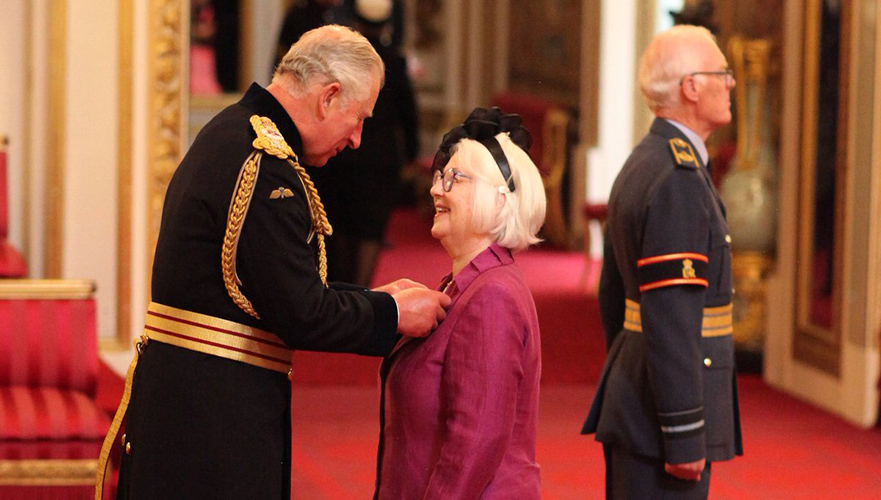 Joan Salter, PhD candidate and Holocaust survivor, has been awarded an MBE for services to Holocaust Education. She has been involved in Holocaust education for over thirty years, working closely with the National Holocaust Centre and Museum in Laxton, Nottinghamshire, as well as the Holocaust Memorial Day Trust. Previously, Joan acted as chair of the Child Survivors’ Association of Great Britain. She has delivered talks in schools, universities and with other groups around the UK and the USA.

Since starting her PhD under the supervision of NTU academic Professor William Niven, she has cut back on delivering talks, focusing more on academia. However, earlier this year she spoke at an event for Holocaust Memorial Day Trust at the House of Lords and visited a USA air force base in Germany.

Joan was born as Fanny Zimetbaum in Brussels, Belgium, being just three months old when the Nazis invaded. The regime meant that Joan was smuggled to France and then Spain, eventually being able to travel to the USA with her older sister Liliane, where they finally reached safety with a foster family. In 1947, Joan and Lilane were reunited with their parents, both of whom managed to survive the war and were living in the UK. She spent the next decade between the UK and the USA and now lives in London.

We caught up with Joan to find out how she feels about the accolade: “It was a great honour to be awarded an M.B.E. for Services to Holocaust Education and a bit surreal for someone who arrived here as a seven year old refugee child in 1947. The investiture day was perfect.  My husband and two adult daughters accompanied me to the Palace and Prince Charles, who is the Patron of the Holocaust Memorial Day Trust, presented the award.  We had an enjoyable chat about my work and I thanked him for being the Patron of the HMDT and for his interest in Holocaust and Genocide issues.”