Rebecca won the prize for her poetry pamphlet ‘Majid Sits in a Tree and Sings’. 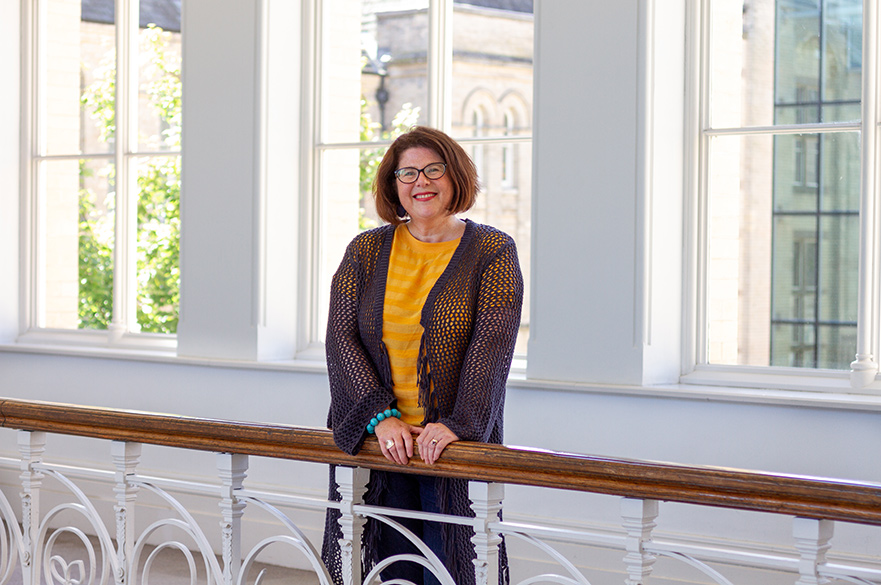 PhD creative writing student Rebecca Cullen has been named one of the winners of the Poetry Business International Book & Pamphlet Competition.The Poetry Business is a publisher and writer development agency, which supports poets, publishes work and edits literary magazine The North. Her pamphlet, entitled ‘Majid Sits in a Tree and Sings’, is based on a real story told to her by a friend which centres around a boy and his mother during the Gaddafi regime.

Rebecca’s PhD is entitled ‘Mastering Time: Time and Temporality in Contemporary Poetry’. She began writing poetry after careers in teaching and the civil service, going on to complete our MA in Creative Writing before pursuing her PhD. In 2016, she was the second poet-in-residence at popular heritage site Newstead Abbey, which is the ancestral home of Lord Byron.

One of the judges of the competition, Liz Berry, had high praise for Rebecca’s collection: “This is a pamphlet of poems which shine and crackle with their own dark electricity. Finely wrought, precise and wide ranging in their themes, they carry a pleasing shiver of wildness in their hearts.”

We caught up with Rebecca to find out what it means to her to win this prize: “I'm really delighted to win this prize. It can be a challenge for mature students to balance home and family sometimes, and I'm really pleased I kept going. My next step is to submit my PhD and prepare for the spoken exam! I'm leading some writing workshops on the NTU Creative Writing Summer School in July, and then I can look forward to the pamphlet launch at the Wordsworth's house in Grasmere in September.”

Discussing how Nottingham Trent University have influenced her journey to becoming a writer, Rebecca told us: “I took voluntary redundancy from the civil service in 2011 and invested the money in an MA in Creative Writing at NTU. That was the first time I'd been with a group of people who were serious about developing their writing and Mahendra Solanki, Sarah Jackson and Rory Waterman all supported me in exploring poetry and poems. My MA tutors encouraged me to apply for a PhD through the Midlands3Cities scheme and I started that in 2014, looking at the relationship between poetry and time. I wouldn't have written a single poem without coming to NTU. During the PhD I was Poet-in-Residence at Newstead Abbey for six months, and some of the pamphlet poems, 'Mother' and 'Opening', were written there.”

Rebecca will now have her pamphlet published, along with a cash prize. She will have at least one poem published in The Poetry Business’ magazine The North, as well as an opportunity to read her work at a poetry reading. It is a fantastic opportunity for Rebecca, with poets linked to The Poetry Business being shortlisted for almost every major poetry prize, including the Poetry Book Society Awards and the Forward Prize.