A student at Nottingham Trent University has designed a smartwatch that alerts predetermined contacts to a serious injury, after his grandparents suffered falls in their home. 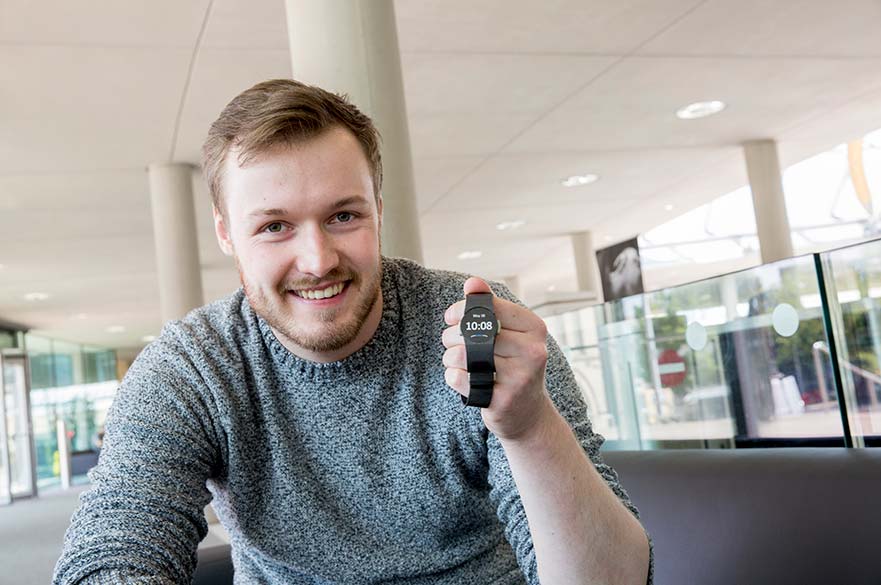 Matt Russell-Smith, a product design student has designed the watch to enable older people to get help faster after they’ve had a fall.

Matt Russell-Smith, a product design student, has designed the watch to enable older people to get help faster after they’ve had a fall.

The wrist watch works by tracking information such as a person’s pulse or movement and when the watch detects a change in a person’s health, it will send information to a touch screen hub located in the home.

The hub then alerts pre-determined contacts and calls for help immediately.

He said: “My grandpa once fell and was unable to move and he couldn’t call for help. As a result he spent an unknown period of time on the floor until he was found.”

If the person has fallen but is still able to move, they can call for help by manually pressing a button on the side of the watch or via the touchscreen hub.

They can also cancel the alert if help is no longer needed.

Matt, a student in the School of Architecture, Design and the Built Environment, said his gran has experienced a couple of falls at home and has had difficulties getting up after they have happened.

“She is very proud about her independence and wants to deal with the situation on her own,” he said.

“So the idea of having a product which would get help for her and then check to see how bad her injuries are based on whether or not she can cancel the alert seemed like a good way to address this.”

During his research into fall detection devices, Matt said he discovered that existing products, such as emergency pendants, are often unattractive and uncomfortable, which can put people off wearing them.

Matt designed his watch with style in mind, making it more appealing to wear but still simple to use.

The watch is made from stainless steel, with a steel mesh strap and a magnetic buckle, to make it easier for people to put on and take off.

Matt said:”I hope the watch could be beneficial to people in a similar position to my grandparents.

“Falls are a huge issue for older people and they can have a big effect on the life of the person and family involved. I knew it was a problem worth tackling.”

The show will feature works by more than 1,300 graduating artists and designers and this year is one of the ways in which Nottingham Trent University is marking its 175th anniversary.

Dr Matthew Watkins, a senior lecturer in product design at Nottingham Trent University, said: “Matt has worked incredibly hard to produce a fully functioning product that can detect and alert family and carers when falls occur in the home. Reducing risk in the incidence of falls in the home and giving users, their family and carers added peace of mind.”