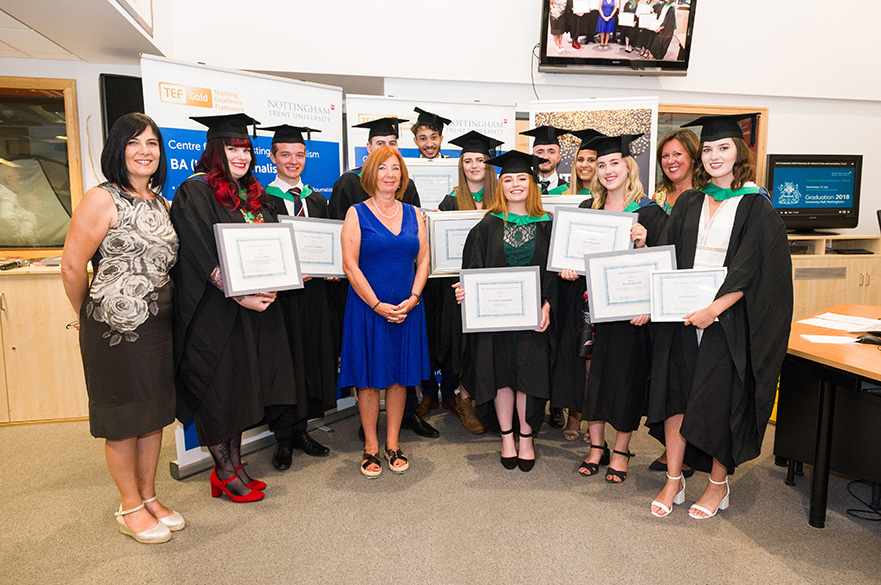 All of the award winners from the ceremony with lecturers Tracey Powell (Left), Carole Fleming (Centre) and Gail Mellors (Right)

Graduating students from our BA (Hons) Journalism and BA (Hons) Broadcast Journalism courses attended the annual Centre for Broadcasting & Journalism (CBJ) awards this year, in order to celebrate and recognise their achievements. Parents, staff and industry partners attended to see a total of 13 prizes given to a selection of exceptional students from both courses.

The ceremony was particularly special this year as it is the last one to be presented by Head of CBJ, Carole Fleming. Carole is leaving the university after 23 years of service and so it proved to be an emotional ceremony for both staff and students alike.

The highest performing students on each course were awarded a prize, based on the overall highest scores achieved for their modules in second and third year. Paige Ingram won the award for BA (Hons) Journalism, while Chloe Bicknell was recognised for BA (Hons) Broadcast Journalism. 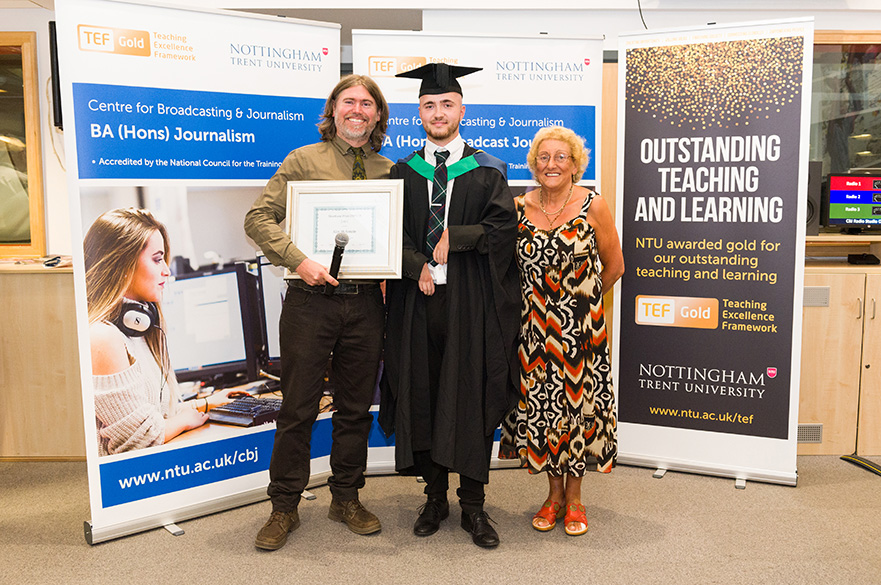 Alex McKenzie accepting his Shorthand Prize with both shorthand tutors.

Alex McKenzie, who has been featured in the Daily Mail and the BBC for his achievement in passing his shorthand 60wpm exam first time despite holding the pen in his mouth due to a disability, won the Shorthand Prize. His tutor, David Williams, commented on how difficult the exams are to pass on the first try for all students, so for Alex to go against the odds to achieve this is particularly commendable.

We were pleased to welcome industry partners who judged and presented many of the awards. Natalie Fahy, digital editor of the Nottingham Post, presented the Best Portfolio award to BA (Hons) Journalism student Paige Ingram, while Senior Producer at Notts TV, Owen Shipton, awarded Charlotte Swindells the award for Most Outstanding Pathway Student. This award recognises the contribution made to Notts TV during the work experience undertaken as part of the Notts TV pathway option on the course.

Further awards for the BA (Hons) Journalism course that were judged by industry included Best Online Feature and Best Feature. The former, judged by Ben Green from the Sheffield Star, was awarded to Niran Yesufu, while the latter, judged by Phil Bramley at the Derbyshire Times, was awarded to Kerry Coshan.

Representatives from ITV, BBC and Global Radio judged awards for BA (Hons) Broadcast Journalism and presented four awards to students between them. Hannah Griffiths, acting News Editor of Global Radio, judged the Best Radio News Report Award which went to Jen Thomas for her package ‘Time to Change’, about mental health. Aeneas Rostos from BBC Radio Nottingham judged the award for Best Radio Documentary, which was awarded to Oliver Caswell for his piece ‘Nocturnal Epilepsy’.

Guests from ITV judged the two television awards for BA (Hons) Broadcast Journalism. Gary Newby, news editor of ITV Central, presented the Best TV News Report award to Cameron Walker for his moving piece around veterans coping with loneliness in old age. The award for Best TV Documentary, awarded by Mike Blair, Executive Producer of ITV Production company Shiver, went to Eve Gateshill for her thought-provoking piece about three young women living with Parkinson’s. Mike was impressed with the quality of interviews gained from students, commenting: “I’d be delighted and proud with my own team if they gained the kind of access and information that these students have managed to get”. 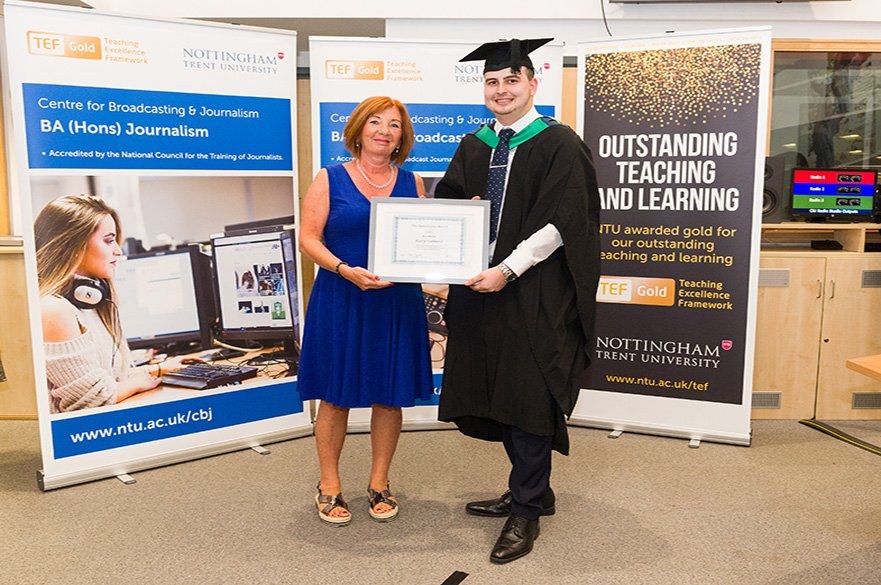 Eve also won the Soroptimist Prize for her documentary, sponsored by the Nottingham Soroptimist Trust. Margaret Oldroyd from the Trust presented the award, which is accompanied by a cash prize to encourage independent projects post-graduation. The Trust is the Nottingham division of Soroptimist International, which is a charity dedicated to improving the lives of women and girls both in the UK and internationally. Eve’s portrayal of three very different women dealing with the same disease reflected their organisational values and shone a light on an underrepresented issue.

Margaret told us: “It struck us how incredibly professional all of the work was, the way it was approached and the quality was equal to the standard you would see on television. It particularly impressed us that all of Eve’s interviews were so different, and the way she used them to put the story together was really moving.”

The final award of the ceremony was the Steve Coates Memorial Award, an award open to all undergraduate students in memory of long-serving CBJ engineer Steve Coates, who passed away in 2015. Carole Fleming remembered Steve’s generosity, enthusiasm and team spirit and awarded Harry Cobbold with the award due to these same qualities. His commitment to ensuring all of his peers were successful and happy during news days made him a worthy winner.

The award ceremony was a great opportunity for both staff and students to celebrate their achievements and provided valuable opportunities for students to network with industry. Many of the industry representatives were happy to offer placements to the winners of their awards, allowing graduates to gain precious work experience at the beginning of their careers.