The conference laid out plans for two national research projects, identifying desired outputs and impacts on the museum and heritage sector 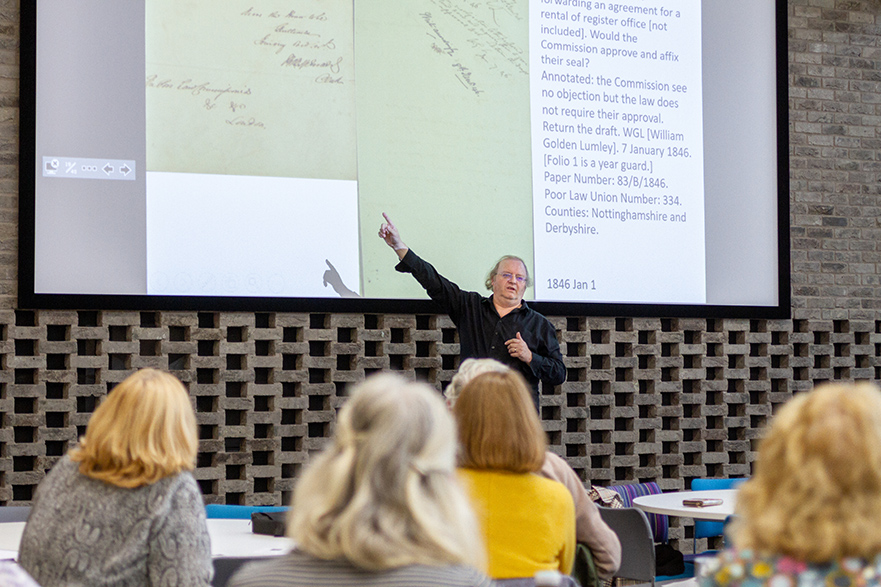 Dr Paul Carter from The National Archives discussing his research

This September, members of The Workhouse Museum Network met at Nottingham Trent University’s Clifton Campus to evaluate the last five years of the project and launch a new strategy for upcoming research activity. Hosted by Head of History, Languages and Global Cultures at NTU, Dr Andrew Gritt, the event bought together academics, museum professionals and archivists to consider specific research themes related to Workhouse Museums.

Workhouses were a key feature of the British welfare system throughout the 18th and 19th centuries. Those unable to support themselves and in dire poverty would enter the workhouse to gain accommodation and employment. It was not until the National Assistance Act in 1948 that the last remaining workhouses were abolished.

The Network formed in 2013, with the primary objective to preserve the history of welfare in Britain from the 18th Century onwards. The group consists of eight Workhouse museums, including Southwell Workhouse in Nottinghamshire, Red Hall Museum in Hampshire and Llanfyllin Workhouse in North Wales. Each workhouse exemplifies a unique part of the history of welfare. Membership of the Network is open to anyone with an interest in the history of poverty and welfare, particularly in regards to the representation of these issues in museums.

After undertaking an evaluation of the Network’s activities thus far, the future agenda of the organisation has shifted significantly. The group aim to focus more clearly on collaboration, community engagement and research excellence moving forward. The event outlined two specific projects, titled ‘From Workhouse to Welfare State’, which aims to research the evolution of the NHS in the twentieth century, and ‘Pauper Lives’, which will cover approaches to pauper biographies in the nineteenth century. The projects will be coordinated by the Network, supported by Nottingham Trent University, and work will be primarily undertaken by museum professionals, volunteers and local historians.

This conference focused on ways in which the Network can facilitate and coordinate the research and the ways in which it could lead to museum displays and exhibitions in the future. Speakers from Nottingham Trent University, University of Warwick, Liverpool John Moores University, Norfolk Museums Service and the National Archives delivered talks exploring the research themes and identifying best practice.

You can find out more about the Workhouse Museums Network here: https://workhousenetworkblog.wordpress.com/