Nottingham Trent University’s School of Animal Rural and Environmental Sciences took home a collection of awards at both Flintham and Southwell Ploughing Match. 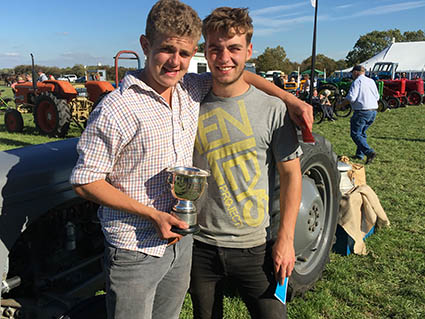 Flintham show started in 1912 as a race between the young lads of the village and those who could plough an acre of land in the best manner. Ray Robson, a former National and World Champion judged the reversible ploughing competition. He took time to discuss with the students how he was judging the plots and explained technicalities of their ploughing.

Elsewhere in the show, agriculture student Kate Pritchard entered the Hedge laying competition and was the only one without a chain saw, instead using hand tools to create a hedge made from thick timber. Derek Copley who was stewarding the class, did the heavy work with his chain saw and tutored her which was a fantastic learning experience for Kate.

Year 2 Agriculture student Hetty Wright showed her own beef shorthorn heifer and was placed second. The bull shown by NTU Farm Bailiff Neil Hodgson won overall champion at the show and the heifer shown by year 2 agriculture student Will Laughton won its class.