NTU Student Harry Collinson made history this month as the youngest umpire at the Sultan of Johor Cup. The international under 21s tournament features elite players from around the world and the event is a major pathway for future professional Hockey players. Younger than most of the players, Harry represented Britain as the GB umpire. 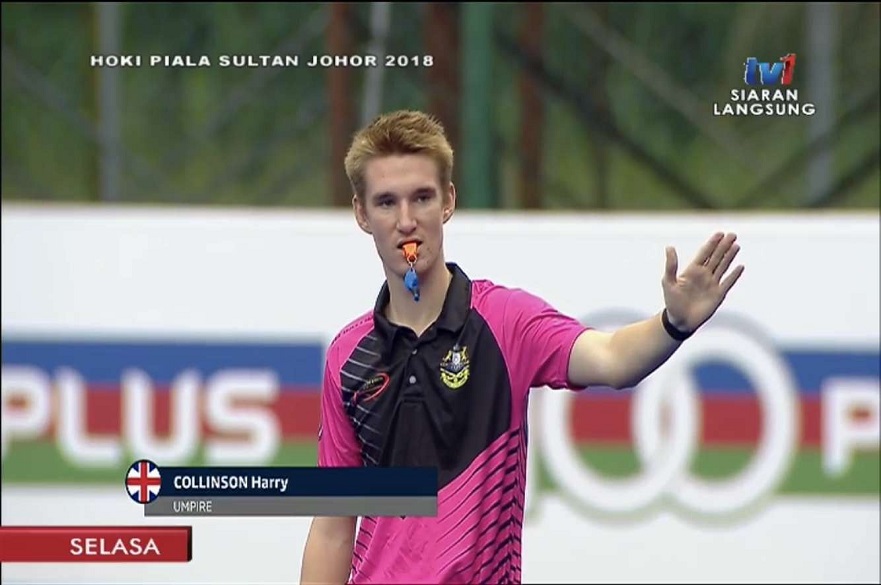 The tournament, which was eventually won by Great Britain, took place from 6 – 13 October in Johor, Malaysia.

Harry, who is a first year Business Management and Marketing student, plays Hockey for NTU as well as officiating internationally.

Harry started out officiating at the age of thirteen after completing a level one course. After some time umpiring, he was put onto the North RYUAG (Regional Young Umpiring Action Group).

From there he worked up the “Panels” until at just 15, he was promoted to the NYUPL (National Young Umpires Promising List).

The list consists of the best 25 umpires in the country between the ages of 16-25, and Harry was the youngest person to ever make it.

Talking about his experience of umpiring the international event Harry said: “There are so many highlights, I was able to meet umpires from all over the world, including one who had umpired at two Olympic games.

“The hospitality shown to us by the hosts and locals was amazing. We were put up in a 5* hotel and I even had all my laundry done for free - a bonus as I don’t have to do any now at university!

“My main highlight was getting a top mark in my report, and having a good tournament in my first international event”.

In May of this year, Harry umpired the National Finals for U16 Boys Clubs at Nottingham Hockey Centre. He was spotted by a senior men’s hockey umpire, and given the opportunity to go to Malaysia for the Sultan of Johor Cup.

After achieving such a fantastic milestone in his career at the very young age of eighteen, Harry is certainly an umpire to be watch.

Harry added: “Being the youngest umpire there, I was seen as the ‘baby’ of the group. Being the youngest, I needed to prove my ability and make a point to my colleagues and umpire manager. Something that I certainly felt I did.

“I think that it is important that the game have young officials. With the arrival of the new World league, umpires need to be able to match up to the high intensity of the game.

“Having more young umpires in the game, we can learn from the senior umpires and have a younger, more knowledgeable umpiring generation.”

Looking to the future Harry’s ultimate goal is to get to the highest level possible in the umpiring world.

Olympics, Commonwealth Games and World Cups are the goal for Harry. In the near future, he hopes to get his Level 3 and umpire National League in England.

We are very proud to be made up of talented and passionate young sportspeople like Harry, look forward to seeing Harry continue to progress as a Hockey umpire and represent himself and NTU around the world.