NTU defeated by Bath at the Bay 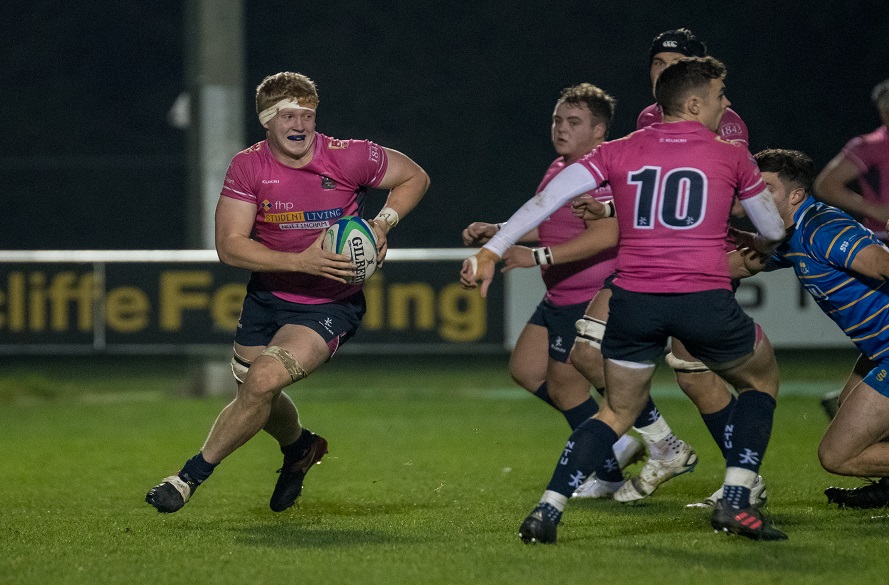 The team returned to home ground hoping to continue their unbeaten run of two home wins from two, and with the game played on Halloween both sides were hoping to avoid a horror performance.

Despite taking the lead early on, it wasn’t to be for the men in pink. NTU fell to defeat at the Bay with the final score standing at NTU 19-37 Bath.

NTU came in to the match after a heavy defeat last Wednesday having lost 41-3 away to Loughborough. Bath on the other hand came in to the fixture after a strong 36-31 victory against Exeter.

The last time the two sides faced off, Bath came out as winners edging NTU with a score of Bath 41-36 NTU.

An early slip up from NTU within the first five minutes of the game nearly made it a disastrous start. However, some superb running from Caetano Branco stopped Bath just short of scoring.

Ten minutes in to the game NTU went over after some good pressure in the Bath 22’ paid off. Max Craven converted the kick with ease: NTU 7-0 Bath.

With just a few minutes left until half time sustained pressure from Bath resulted in a penalty kick being awarded and it was successfully converted: NTU 7-3 Bath.

More good work from Bath helped them to go over and take the lead in the game: NTU 7-10 Bath.

Bath looked the better side as the game headed towards the break, as the visitors added another try on the cusp of half time to extend the lead: NTU 7-17 Bath.

NTU went in at the break knowing they had it all to do in the second half after a strong display from the opposition. The score at the interval stood at NTU 7-17 Bath.

Despite working hard to get a foothold back in the game, NTU couldn’t create anything meaningful in opening exchanges. Things got worse for the home side when Bath went over twice in quick succession to put real daylight between the two teams: NTU 7-27 Bath.

The visitors, who came in to the match sitting joint top of the table with Hatpury, didn’t relent in pushing hard to improve the score even further. Two more try’s for Bath helped cement the lead: NTU 7-37 Bath.

Despite the game being all but over, NTU kept pushing to bring the scores closer and good work  with five minutes to go put them over the line: NTU 12-37 Bath.

In the very dying embers of the game NTU’s Caetano Branco showed excellent desire to work until the very last whistle, going over at the death: NTU 19-37 Bath.

After the game, the result puts NTU eighth in the table. The lads now have two weeks before their next game and the break should prove invaluable in allowing players to recover from injury and get back to full fitness.

NTU defeated by Bath at the Bay