Martin Stone, associate director of Tank PR, visited the students to explain what it takes to work in the industry. 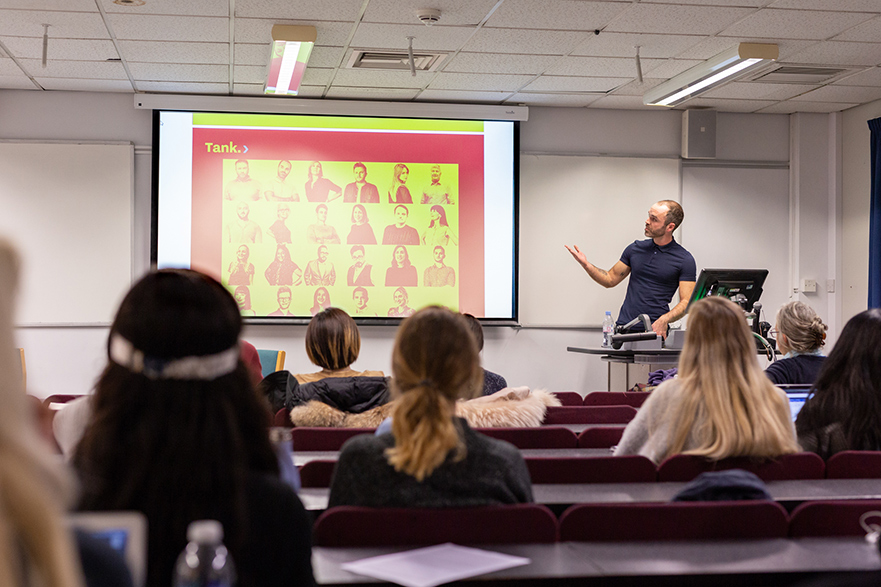 Martin Stone talking to the students about Tank PR's branding

Martin is an alumnus of Nottingham Trent University, studying his BA in English Literature and then progressing to our MA in Broadcast Journalism, graduating in 2005. He began his career in the journalism industry, working for BBC Radio Nottingham and East Midlands Today. He mentioned how closely linked the two industries are, as he eventually made a natural progression into public relations. He set up Tank PR alongside Director Trevor Palmer eight years ago and has been successful in building the company since then. Tank is based in the Lace Market in Nottingham and boasts high profile clients including Experian, Vision Express, Carphone Warehouse, Intu Victoria Centre and Cornerhouse.

Martin discussed his own career path, giving an overview of the ethos of Tank, going on to explain the skills needed for the role. His insights were incredibly useful for the group, many of whom have aspirations to go onto careers in the sector. Martin described the various degrees his employees at Tank hold, and expressed that transferable skills and motivation are the most necessary skills for success in the industry.

Storytelling is the ethos of the company, so the importance of being a good writer was explained to the students, even if writing isn’t necessarily part of a person’s day-to-day role. The company actually offers several digital packages, including social media management, search engine optimisation and pay per click services. Martin revealed the vital skills for a graduate to have before applying, including being flexible, motivated, quick to react and calm in a crisis. He additionally stressed that no day in PR is the same, as it’s a very varied and fast paced industry.

The students asked perceptive questions and found Martin’s story of self-made success particularly inspiring. Lecturer Catherine Adams, who organised the talk, commented: “It was brilliant for the students to get an insider's view from the cutting edge of the PR industry. It's exciting to know that we have such a dynamic company on our doorstep. We were very lucky to have persuaded Martin back to Clifton!”

Martin Stone said: “As an agency, we're not only focused on the training and development of our own team, but also on helping to grow future talent. It was great to return to Clifton Campus to meet the students and I love the fact they weren't afraid to ask some tough questions - a skill that bodes well for a future career in PR."