Dr Clay, course leader of our MA in English Literary Research, has delivered the events as part of the Vote 100 celebrations and the 90th anniversary of the Equal Franchise Act 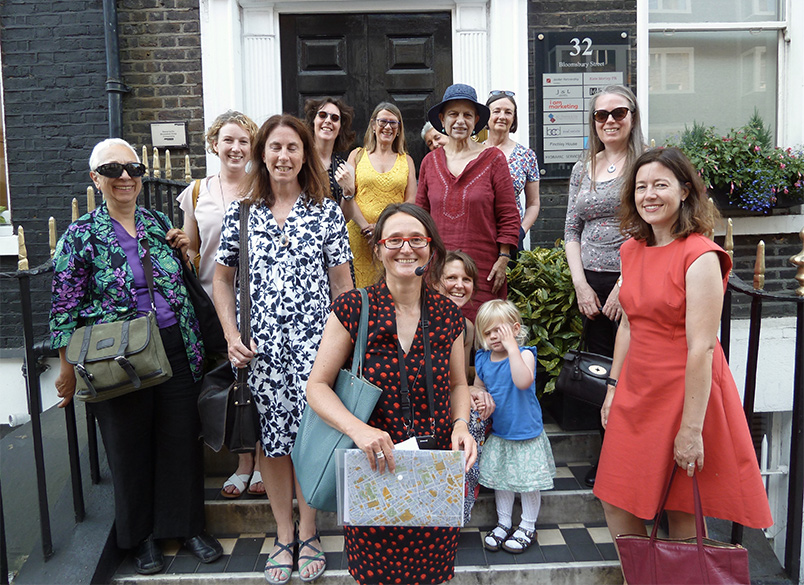 Dr Catherine Clay has been invited to speak at a variety of events this year to help celebrate both Vote 100 and the 90th anniversary of the Equal Franchise Act, which gave all women in Britain the right to vote on the same terms as men. The events come in conjunction with the launch of her new book Time and Tide: the Feminist and Cultural Politics of a Modern Magazine (EUP 2018). Time and Tide was a weekly political feminist and literary review magazine founded by Welsh suffragette Lady Rhondda in 1920. Catherine, who is the course leader of our MRes English Literary Research, has research interests in women’s literature and feminism, and was able to speak in several venues this year about Time and Tide magazine’s influence and role in the campaign for women’s equal political rights.

In January, Catherine kicked off the year by speaking at the ‘Archives and Texts’ research seminar series at the University of Reading, discussing the Time and Tide archive. In April, she was invited to speak at the Women’s Library in London, discussing the magazine and its relationship to feminist and cultural politics. Catherine will continue to work with the Women’s Library to develop an exhibition on interwar women’s periodicals, due to open in 2021.

She has also spoken at Nottingham Trent University’s Pauline Polkey conference this September, delivered a talk and book signing at Five Leaves Bookshop and delivered the annual Dora Marsden Lecture at University of Manchester.

Notably, Catherine launched her book in July of this year, which marked the 90th anniversary of the Equal Franchise Act, giving all women in Britain the vote on the same terms as men. She took to Persephone Books Bloomsbury bookshop to discuss the book, and led a guided walk, which explored the history of the magazine. Catherine guided guests through the movement of the magazine from the offices in the heart of Britain’s newspaper industry to its eventual base overlooking the British Museum.

Catherine discussed with us this year’s events, and the ways in which her book has allowed her to discuss the impact Time and Tide had on the campaign for equality. She told us: “As a researcher of women's literature and feminism it has been exciting to publish my book Time and Tide: the Feminist and Cultural Politics of a Modern Magazine (EUP 2018) in the centenary year of women winning the vote in Britain. Women writers played a vital role in the campaign for women’s suffrage, forming such organisations as the Women Writers’ Suffrage League to promote the Cause. As we know from the Vote 100 coverage this year 1918 was the first stage of a victory that would take another 10 years to complete.”

She continued: “Given Time and Tide's role in the ongoing campaign for women's equal political rights after 1918 it was therefore fitting that I was able to launch my book on 2nd July marking the 90th anniversary of the Equal Franchise Act. With its all-female board of directors Time and Tide was a significant force in interwar journalism. First targeting a newly enfranchised class of women readers whom it sought to engage in active citizenship, it gradually rebranded itself as a general-audience weekly review competitive with such publications as the male-edited New Statesman while continuing to afford status to women writers, journalists and critics.”

She added: “Of all the events I have been involved in this year to talk about my research, the highlight has to be the official launch of my book, which began with my guided walking tour of literary London from the address of Time and Tide's first offices on Fleet Street. My tour took us to 32 Bloomsbury Street which housed Time and Tide's offices from 1929, and which by special arrangement we were able to enter and recall the feminist and literary figures who had worked there. The event concluded with a wine reception, sponsored by EUP, at the Bloomsbury bookshop of Persephone Books: a publisher and bookseller dedicated to reprinting neglected fiction and non-fiction by women writers, many of them contributors to Time and Tide.”