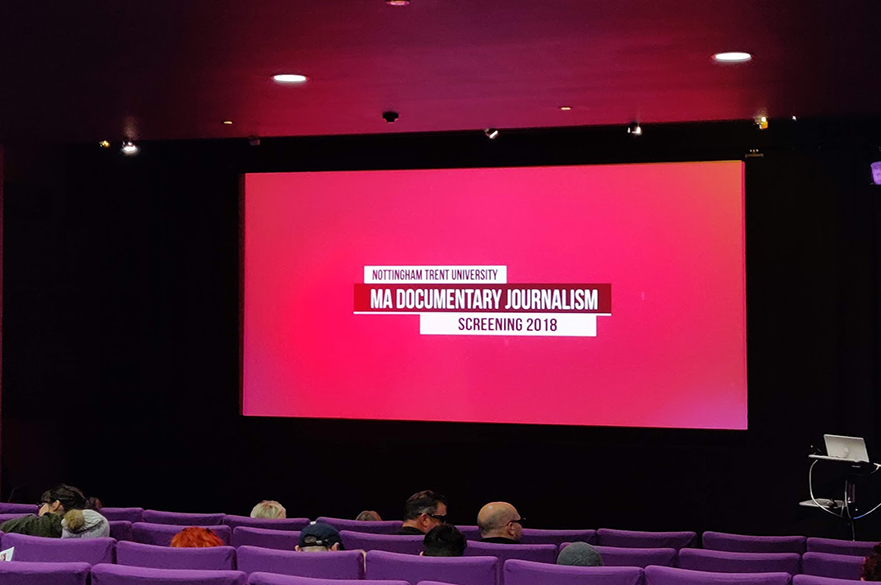 Students from our MA in Documentary Journalism course rounded off their degree this December in a screening event at Nottingham’s Broadway Cinema. Taking place on the same day as their graduation, the students were able to celebrate their achievement with friends and family, as well as showcase their work to key industry partners.

The students organised and produced the event completely independently, and enjoyed a packed out screening with a lively audience. Among the guests were representatives from the BBC, BFI, Channel 4, Sheffield Documentary Festival, Notts TV and local filmmakers.

11 short documentaries were aired overall, ranging from four minutes in length to nearly fifteen minutes. Styles varied from intimate portraits of one person in particular, to an exploration of wider issues such as diversity in sport and reoffending rates in prisoners.

Jade Vowles screened two documentaries, one named Go Shred, which looked at a group of female skateboarders in Nottingham and explored the issue of diversity and gender stereotyping that skateboarders face within the culture. She also showcased The Hands of Time, which tells the story of a horologist who has worked in the profession since he was 13 years old.

Another graduate, Ashley Carter, screened two of his documentaries. He firstly screened Ladies and Gentlemen: Flex Buffington, a short film about an unlikely wrestler which was selected for the Burning Hammer Film Festival this year. He also showed The Dreams of Running Bear which follows John Jerzysek, a man from Coventry who currently lives a Native American way of life. With more people becoming aware of cultural appropriation, he’s found himself questioning his lifestyle choices. 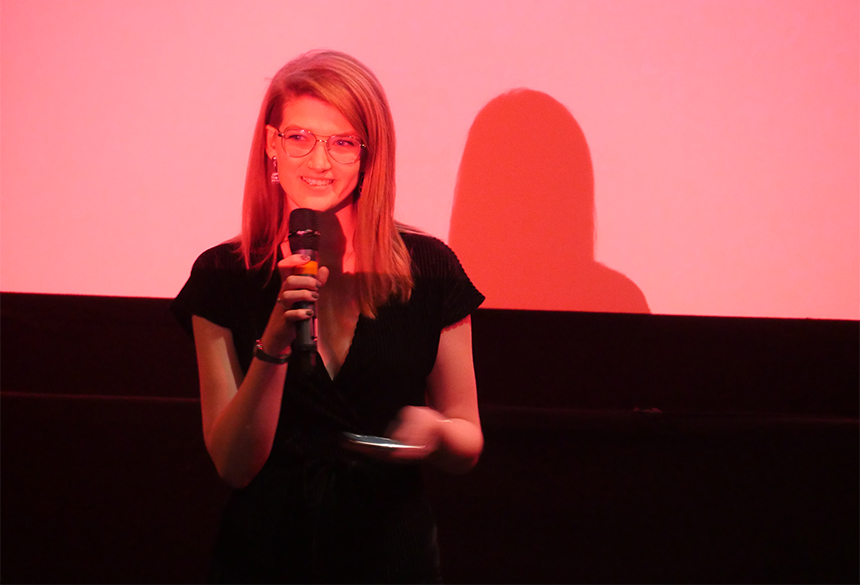 Jade Vowles introducing her documentary at the event

Other highlights included the moving One Eye by Nahla El Nemr, which tells the story of Ahmed, an activist in Egypt who lost an eye during the revolution against President Hosni Mubarak. Chris Doyle’s powerful film Hear Me explores the lack of support and lack of funding given to deaf athletes, leaving them struggling to find opportunities. Nolan Benson follows innovative coffee company, Redemption Roasters, in his film An Extra Shot. Located at Aylesbury Prison, they train young offenders in barista skills in order to help them find employment once they are released.

Remi Cribb screened two documentaries. Following the Dream tells the story of Kilnsey Green, a band from Yorkshire trying to pursue their musical ambitions against the odds. He also screened Moment, a commentary on modern day consumerism and the perceived importance of material possessions. Allan Njani explores the process of musician Blessing Magore in his film Afrobeat, while Katinka Delvoye screened an intimate portrait of her personal battle with anorexia in Into Thin Air.

Course leader Lyn Champion commented: “My experience in production over 25 years has put me on a mission to enable the next generation of documentary makers to go forth and make their mark: to get the confidence to express themselves and the skills to tell stories that need to be told.”

The students expressed their thanks to everyone that made the event possible. They said: “We would like to express our thanks to all of the Nottingham Trent University lecturers for their support throughout the year. We’d especially like to thank our course leader Lyn Champion, whose constant advice, mentorship and dedication was integral to ensuring we all made the best films possible. Special thanks also to the CBJ Technicians: Paul Argyle, Dan Hodgett, Daniel Gittings, James Baker, Kelly Webster and Russ Bingley. Without their tireless encouragement and expertise, making these films would not have been possible.”