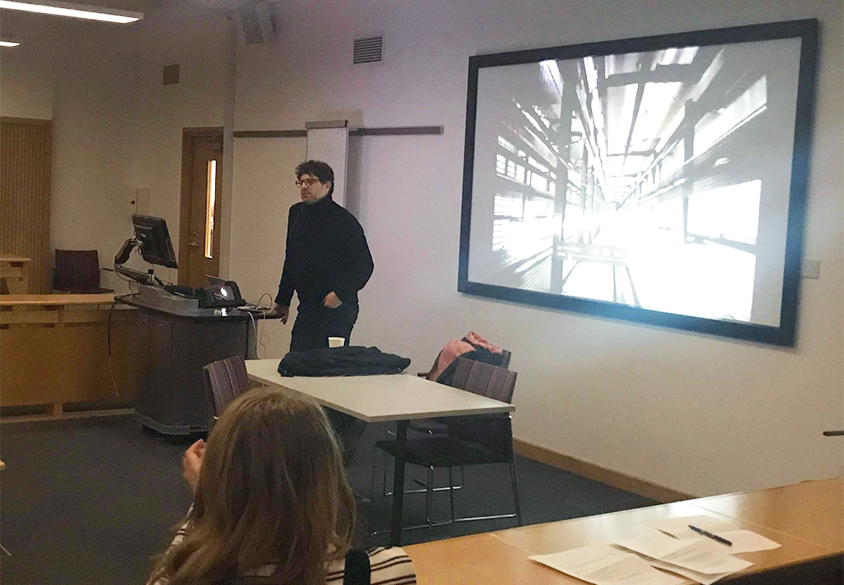 Marc Isaacs talking the students through the opening scenes of 'Lift'

Students studying MA Documentary Journalism and undergraduate students from the Department of Journalism and Media were privileged to welcome award-winning director and cinematographer Marc Isaacs for a masterclass on his work.

Since releasing his first film in 2001, Marc has made more than 10 creative documentaries for the BBC and Channel 4. He has won a number of awards from industry bodies including BAFTA and Royal Television Society. His work also features in numerous documentary books and academic studies, as he regularly guest lectures at the London Film School, The National Film and Television School and Royal Holloway University.

As part of the session, Marc screened a section of his film ‘Lift’a documentary shot in the lift of a tower block in London. Course leader, Lyn Champion, already covers this film as part of the course, which meant students were armed with insightful questions to ask.

Marc invited students to share their thoughts, feelings and questions on the film, which inspired a fruitful discussion about different cinematic techniques. The group discussed Marc’s use of character, and the significance of not revealing people’s names in the documentary. Marc wanted the audience to learn about the people involved for themselves during the course of the film, rather than revealing anything himself. Similarly, the location of the tower block is never revealed, which ensures that perceptions of place do not impact the audience’s experience of the film.

The experience definitely gave students food for thought when planning their own documentaries. Marc revealed more about the process of researching and organising the film process, discussing how the tower block had been chosen and how he learned more about the residents living there.

The students also viewed clips of his 2007 film ‘All White in Barking’ which revolves around race divisions in Barking following the rise of the BNP, having just become the second largest political party in the region at the time. Marc talked through the ways in which he had put specific scenes together to tell a story, and the extent that footage could or should be manipulated to help the narrative. The film is in a slightly different style to ‘Lift’, which allowed students to compare and contrast different filmmaking techniques.

The students thoroughly enjoyed this insight into the mind of an award-winning filmmaker, giving them fantastic inspiration for future projects.