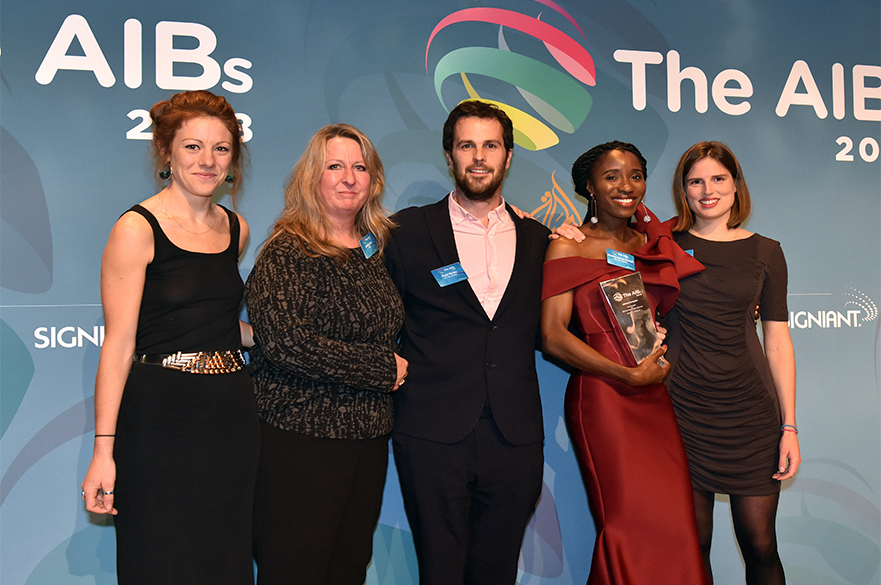 The team accepting their award

The film tells the extraordinary story of Brigitte Sossou Perenyi who set out to trace her steps from slavery to rescue in Ghana, with a film which was the third most viewed story on the BBC website and which has been translated into ten global languages.

Thousands of women and girls across West Africa have lost their freedom because of the centuries-old practice of ‘trokosi’. The practice requires families to give a female child to a shrine as a means of appeasing the gods. Some spend the rest of their lives paying for the sins of family members. Brigitte was one of those girls until she was freed from the shrine where she was held, following the intervention of an American art dealer, who had seen a programme about trokosi on the US channel, CBS.

Angela Robson, a multi-award-winning journalist and the producer of the film, first met Brigitte on an assignment for Marie Claire in West Africa in 2013 where they collaborated on a piece about trokosi. They struck up a deep friendship and resolved to make a film about Brigitte’s life.

“I knew I could work with Angela to share my story with a global audience to inspire and encourage others to share their own stories,” says Brigitte.

Brigitte was also involved in the editing process of the documentary, to ensure the piece remained authentic to her personal story. Director Paul Myles commented: “What we can learn from this is that many journalists publish the story and then move on and don’t keep contact. Angela had built a personal relationship and a trust over the years after that initial magazine story was published and I think that’s what allowed us to do such a great in-depth project when the moment was right.”

Judges at the Association of International Broadcasting (AIB) commented on the “incredible storytelling” and called the programme “a potent film about wrongdoing that is easy to ignore within the context of African culture”.

Brigitte spoke at the awards ceremony about how difficult it had been to share her story, but how important it’d been to do so. “I always believed I was saved to share my story, to be able to inspire and impact others. I was silent for over 18 years. I didn’t want to talk about it because I was afraid of how others would receive my story. It’s still very much a taboo to speak out.”

The Association of International Broadcasting is a global alliance of media companies that deliver or support cross-border and multi-platform international broadcasting.

Angela is continuing her long-standing relationship with Brigitte, currently producing a radio documentary for the BBC World Service Heart and Soul strand. The documentary will be recorded in West Africa.

On February 28th, Angela will be giving a guest lecture about the making of ‘My Stolen Childhood’ in the Centre for Broadcasting & Journalism, from 11am-1pm.

You can watch the full documentary here: https://www.bbc.co.uk/programmes/b0b4dpzr